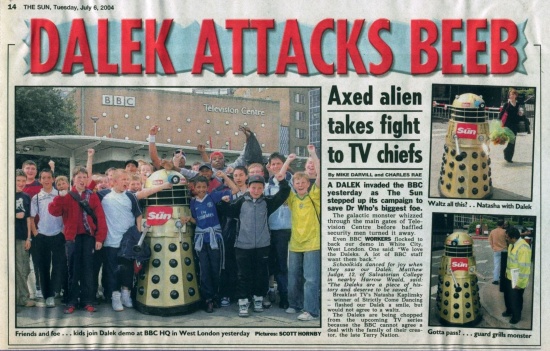 A DALEK invaded the BBC yesterday as The Sun stepped up its campaign to save Dr Who's biggest foe.

The galactic monster whizzed through the main gates of Television Centre before baffled security men turned it away.

Even BBC WORKERS flocked to back our demo in White City, West London. One said: "We love the Daleks. A lot of BBC staff want them back."

Schoolkids danced for joy when they saw our Dalek. Matthew Judge, 12, of Salvatorian College in nearby Harrow Weald, said: "The Daleks are a piece of history and deserve to be saved."

Breakfast TV's Natasha Kaplinsky - winner of Strictly Come Dancing — flashed our Dalek a smile, but would not agree to a waltz.

The Daleks are being chopped from the upcoming TV series because the BBC cannot agree a deal with the family of their creator, the late Terry Nation.

Waltz all this? .. Natasha with Dalek