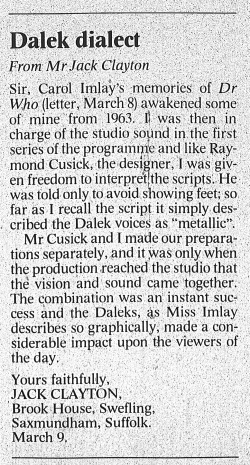 Sir, Carol Imlay's memories of Dr Who (letter, March 8) awakened some of mine from 1963. I! was then in charge of the studio sound in the first series of the programme and like Raymond Cusick, the designer, I was given freedom to interpret the scripts. He was told only to avoid showing feet; so far as I recall the script it simply described the Dalek voices as "metallic".

Mr Cusick and I made our preparations separately, and it was only when the production reached the studio that the vision and sound came together. The combination was an instant success and the Daleks, as Miss Imlay describes so graphically, made a considerable impact upon the viewers of the day.