Dalek man on the air 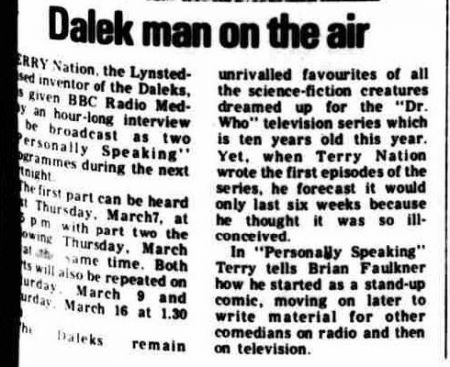 Terry Nation, the Lynsted-raised inventor of inventor of the Daleks, was given BBC Radio Medway an hour-long interview to be broadcast as two "Personally Speaking" programmes during the next fortnight.

The first part can be heard Thursday, March7, at 5pm with part two the following Thursday, March 14 at the same time. Both will also be repeated on Saturday, March 9 and Saturday March 16 at 1.30

The Daleks remain unrivalled favourites of all the science-fiction creatures dreamed up for the "Dr. Who" television series which is ten years old this year. Yet, when Terry Nation wrote the first episodes of the series, he forecast it would only last six weeks because he thought it was so illconceived.

In "Personally Speaking" Terry tells Brian Faulkner how he started as a stand-up comic, moving on later to write material for other comedians on radio and then on television.