Daleks steal the show from Dr. and Co. 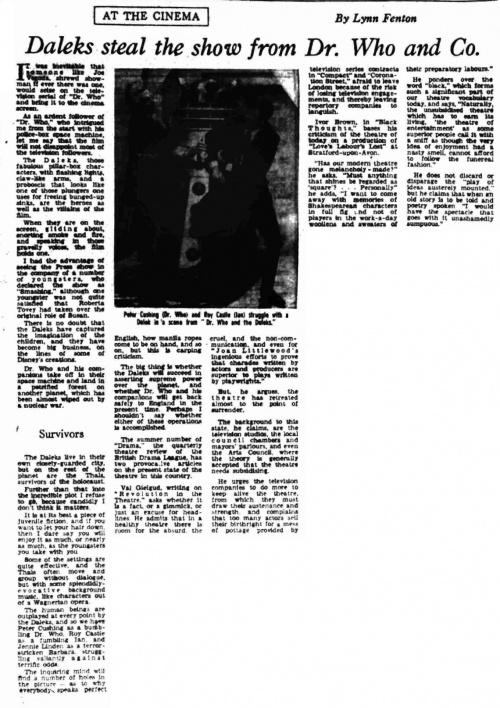 It was inevitable that someone like Joe Vagoda, shrewd showman if ever there were one, would seize on the television series of "Dr. Who" and bring it to the cinema.

As an ardent follower of "Dr. Who," who intrigued me from the start with his police-box space machine, let me say that the film will not disappoint most of the television followers.

The Daleks, those fabulous pillar-box characters, with flashing lights, claw-like arms, and a proboscis that looks like one of those plungers one uses for freeing bunged-up sinks, are the heroes as well as the villains of the film.

When they are on the screen gliding about, snorting smoke and fire, and speaking in those gravelly voices, the film holds one.

I had the advantage of seeing the Press show in the company of a number of youngsters, who declared the "Smashing," although one youngster was not quite satisfied that Roberta Tovey had taken over the original role of Susan.

There is no doubt that the Daleks have captured the of the imagination of the children, and they have become big business, on the lines of some Disney creations.

The Daleks living in their own closely-guarded city, but on the rest of the planet are the Thals, survivors of the holocaust.

Further than that into the incredible plot I refuse to go, because candidly I don't think it matters.

It is at its best to a piece of juvenile fiction, and if you want to let your hair down, then I'd dare say you'll enjoy it as much, or nearly as much, as the youngsters you take with you.

Some of the settings are quite effective, and the Thals often move and group without dialogue, but with some splendidly evocative background music, like characters out of the Wagnerian opera

The human beings are outplayed at every point by the Daleks, and so we have Peter Cushing as a bumbling Dr. Who, Roy Castle as a fumbling Ian, and Jennie Linden as a terror-stricken Barbara, struggling valiantly against terrific odds.

The inquiring mind will find a number of holes in the picture-as to why everybody speaks perfect English, how manila ropes come to be on hand, and so on, but this is carping criticism.

The big thing is whether the Daleks will succeed in asserting supreme power over the planet, and whether Dr. Who and his companions will get back safely to England in the present time. Perhaps I shouldn't say whether either of these operations is accomplished.