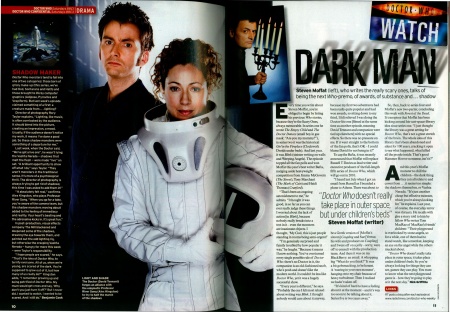 Steven Moffat (left), who writes the really scary ones, talks of being the next Who-premo, of awards, of substance and ... shadow

Doctor Who monsters tend to fall into one of two categories: those born of grisly make-up (this series, we've had Ood, Sontarans and Hath) and those brought to life by computer graphics (Adipose, Pyroviles and Vespiform). But last week's episode claimed something of a first: a creature made from ... lighting?

Director of photography Rory Taylor explains, "Lighting, like music, is often overlooked by the audience. It should blend into the picture, creating an impression, a mood. Usually, if the audience doesn't notice my work, it means I've done a good job. So these shadow monsters were something of a departure for me."

Last week, when the Doctor said, "We've got a live one", he wasn't lying: the Vashta Nerada — shadows that melt the flesh — were made "live" on set. "A brilliant opportunity to show off what I do," says Taylor. They aren't monsters in the traditional sense. It's more of a psychological thrill. The director of photography is always trying to get rid of shadows; this time I was asked to add them in!"

"It absolutely felt real," confirms Alex Kingston, who plays Professor River Song. "When you go for a take, you're aware of the camera team, but the shadow monsters moving about added to the feeling of immediacy and reality. Your heart's beating and the adrenaline kicks in. It's great fun."

In post-production, visual effects company The Mill blackened and deepened some of the shadows, drawing the eye towards them, and painted out the odd lighting rig, but otherwise the creeping Vashta Nerada — hungry for more this week — were Taylor's responsibility.

"I hope people are scared," he says. "That's the idea of Doctor Who, to terrify everyone. All of us, when we're young, are scared of the dark. You're supposed to grow out of it, but how many of us really do?" Kingston adds, "I remember growing up and being petrified of Doctor Who. My mum would get cross and say, 'Why don't you just turn it off?' But I never did. I wanted to watch. I wanted to be scared. And I still do."

Every time you write about Steven Moffat, you're obliged to begin by listing his previous Who stories, because they're the Scary Ones, always memorable. In series one he wrote The Empty Child and The Doctor Dances (small boy in gas mask: "Are you my mummy?"), in series two it was the historical Girl in the Fireplace (Clockwork Droids under beds). And last year, it was Blink (sinister writing on walls and Weeping Angels). The episode topped all the fan polls and won Moffat this year's best writer Bafta, nudging aside heavyweight competition from Jimmy McGovern (The Street), Tony Marchant (The Mark of Cain) and Heidi Thomas (Cranford).

"That's been an ongoing astonishment to me," he admits. "I thought it was good, in so far as you can ever really judge these things. I worried about the lack of action [in Blink], because nobody really breaks into a trot in it — even the monsters are inanimate objects. I thought, 'My God, this is just people standing in rooms being semi-urgent!'

"I'm genuinely surprised and faintly troubled by how popular it was," he laughs. "Because it means I know nothing. You've overturned every single possible rule of Doctor Who: there's no Doctor in it, the companion is an old-fashioned snob, who's posh and doesn't like the modern world. It couldn't be less like Doctor Who, yet it was a hugely successful show.

"Every year is different," he says. "Probably the one I felt most relaxed about writing was Blink. I thought nobody would care about it anyway, because my first two adventures had been really quite popular and had won awards, so sitting down to my third, I felt relieved I was doing the Doctor-lite one [filmed at the same time as another episode, meaning David Tennant and companion were tied up elsewhere] with no special effects. So there was no pressure on me. If it went straight to the bottom of the fan polls, that's OK — I could blame David for not being in it!"

To cap the Bafta, it was recently announced that Moffat will replace Russell T Davies as lead writer and executive producer of the full-length fifth series of Doctor Who, which will go out in 2010.

"I heard last July when I got an email from Russell as I boarded a plane to Athens. There was about to

be a Greek version of [Moffat's sitcom] Coupling and Sue [Vertue, his wife and producer on Coupling] and I were off on a jolly — sorry, were off to consult with the production team. And there it was on my BlackBerry: an email. A whopping big "What do you think?" It was a bit gobsmacking, to be honest. A 'roaring in your ears moment', hanging onto my chair because of heavy turbulence. Then I realised we hadn't taken off.

"It's kind of hard to have a feeling about it at the moment — and it's way too soon to be talking about it. Series five is two years away."

So, then, back to series four and Moffat's new two-parter, concluding this week with Forest of the Dead. It transpires that Moffat has been kicking around his vast-space-library idea since series one. "I just thought the library was a great setting for Doctor Who, that's not a great stretch of the brain. The whole idea of this library that's been abandoned and silent for 100 years, cracking it open to see what happened, what killed all the people inside. That's good Hammer Horror nonsense, isn't it?"

And this year's Moffat monster to chill the children — the dark thing they can all relate to and cower from ... it seems too simple: the shadows themselves, or Vashta Nerada. "It's just another cheap but effective monster, which you're always looking for," he explains. Last year, of course, the everyday terror was statuary. He recalls with glee a story told to him by fellow Who writer Tom MacRae of MacRae's friends' children: "Their playground is overlooked by stone angels, so for a while, one of them had to stand watch, like a meerkat, keeping an eye on the angel while the others mucked about.

"Doctor Who doesn't really take place in outer space, it takes place under children's beds. So you're always looking for things they can see, games they can play. You want to know what the next playground game is — how they're going to play at it the next day." 5