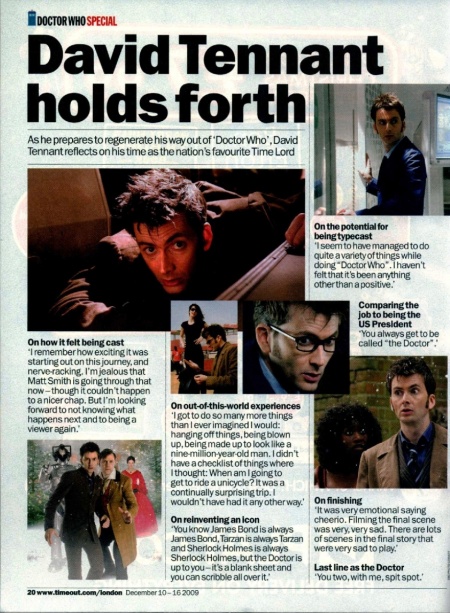 As he prepares to regenerate his way out of 'Doctor Who', David Tennant reflects on his time as the nation's favourite Time Lord

On how it felt being cast

'I remember how exciting it was starting out on this journey, and nerve-racking. I'm jealous that Matt Smith is going through that now—though it couldn't happen to a nicer chap. But I'm looking forward to not knowing what happens next and to being a viewer again.'

'I got to do so many more things than I ever imagined I would: hanging off things, being blown up, being made up to look like a nine-million-year-old man. I didn't have a checklist of things where I thought: When am I going to get to ride a unicycle? It was a continually surprising trip. I wouldn't have had it any other way.'

On reinventing an icon

On the potential for being typecast

'I seem to have managed to do quite a variety of things while doing "Doctor Who". I haven't felt that it's been anything other than a positive.'

Comparing the job to being the US President

'You always get to be called "the Doctor".'

'It was very emotional saying cheerio. Filming the final scene was very, very sad. There are lots of scenes in the final story that were very sad to play.'

Last line as the Doctor