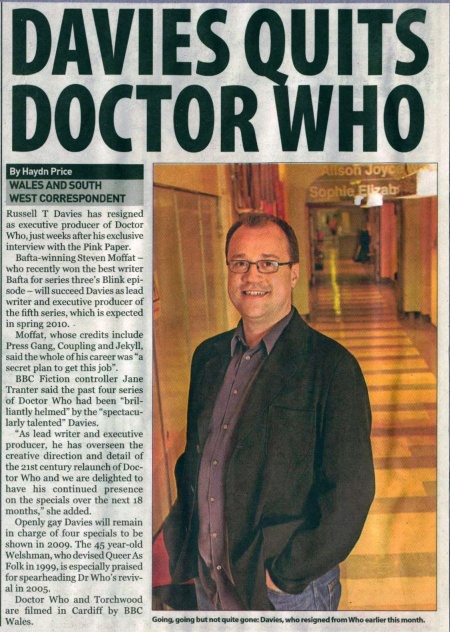 Russell T Davies has resigned as executive producer of Doctor Who, just weeks after his exclusive interview with the Pink Paper.

Bafta-winning Steven Moffat — who recently won the best writer Bafta for series three's Blink episode — will succeed Davies as lead writer and executive producer of the fifth series, which is expected in spring 2010. Moffat, whose credits include Press Gang, Coupling and Jekyll, said the whole of his career was "a secret plan to get this job".

BBC Fiction controller Jane Tranter said the past four series of Doctor Who had been "brilliantly helmed" by the "spectacularly talented" Davies.

"As lead writer and executive producer, he has overseen the creative direction and detail of the 21st century relaunch of Doctor Who and we are delighted to have his continued presence on the specials over the next 18 months," she added.

Openly gay Davies will remain in charge of four specials to be shown in 2009. The 45 year-old Welshman, who devised Queer As Folk in 1999, is especially praised for spearheading Dr Who's revival in 2005.

Doctor Who and Torchwood are filmed in Cardiff by BBC Wales.

Caption: Going, going but not quite gone: Davies, who resigned from Who earlier this month.