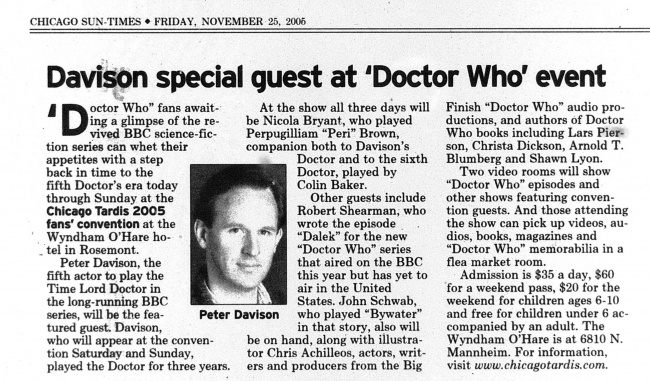 'Doctor Who" fans awaiting a glimpse of the revived BBC science-fiction series can whet their appetites with a step back in time to the fifth Doctor's era today through Sunday at the Chicago Tardis 2005 fans' convention at the Wyndham O'Hare hotel in Rosemont.

Peter Davison, the fifth actor to play the Time Lord Doctor in the long-running BBC series, will be the featured guest. Davison, who will appear at the convention Saturday and Sunday, played the Doctor for three years.

At the show all three days will be Nicola Bryant, who played Perpugilliam "Peri" Brown, companion both to Davison's Doctor and to the sixth Doctor, played by Colin Baker.

Other guests include Robert Shearman, who wrote the episode "Dalek" for the new "Doctor Who" series that aired on the BBC this year but has yet to air in the United States. John Schwab, who played "Bywater" in that story, also will be on hand, along with illustrator Chris Achilleos, actors, writers and producers from the Big Finish "Doctor Who" audio productions, and authors of Doctor Who books including Lars Pierson, Christa Dickson, Arnold T. Blumberg and Shawn Lyon.

Two video rooms will show "Doctor Who" episodes and other shows featuring convention guests. And those attending the show can pick up videos, audios, books, magazines and "Doctor Who" memorabilia in a flea market room.

Admission is $35 a day, $60 for a weekend pass, $20 for the weekend for children ages 6-10 and free for children under 6 accompanied by an adult. The Wyndham O'Hare is at 6810 N. Mannheim. For information, visit www.chicagotardis.com.