Day saved by Dr Who 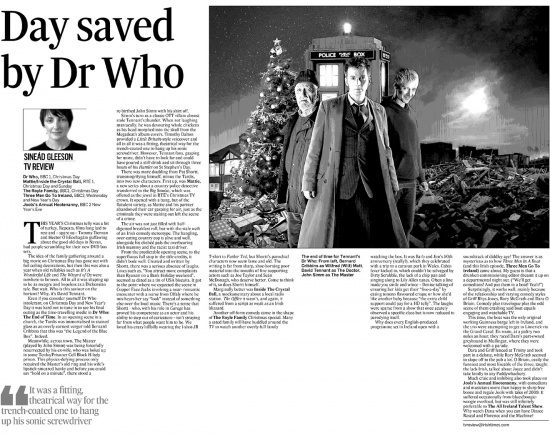 Even if you consider yourself Dr Who intolerant, on Christmas Day and New Year's Day it was hard not to tune in to see his final outing as the time-travelling medic in Dr Who: The End of Time. In an opening scene in a church, the Tardis was immortalised in stained glass as an overly earnest verger told Bernard Cribbins that this was "the Legend of the Blue Box". Indeed.

Meanwhile, across town, The Master (played by John Simm) was being forcefully resurrected by his ex-wife, who was holed up in some Tenko/Prisoner Cell Block H lady prison. This physics-defying process only required the Master's old ring and his wife's lipstick-smeared hanky and before you could say "hold on a minute". there stood a re-birthed John Simm with his shirt off.

Simm's turn as a classic OTT villain almost stole Tennant's thunder. When not laughing maniacally, he was devouring whole chickens as his head morphed into the skull from the Megadeath album covers. Timothy Dalton provided a Little Britain-style voiceover and all in all it was a fitting, theatrical way for the trench-coated one to hang up his sonic screwdriver. However, Tennant fans, gasping for more, didn't have to look far and could have poured a stiff drink and sit through three hours of his Hamlet on St Stephen's Day.

Caption: The end of time for Tennant's Dr Who: From Left, Bernard Cribbins as Wilfred (Wilt) Mott, David Tennant as The Doctor, John Simm as The Master