Death of Daleks' No 1 TV enemy 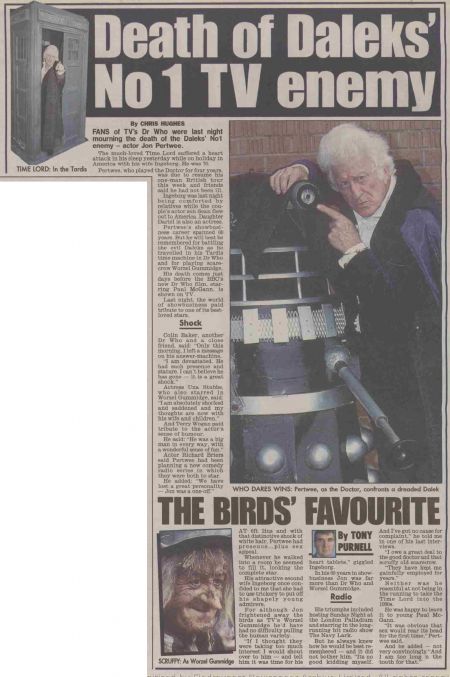 FANS of TV's Dr Who were last night mourning the death of the Daleks' No1 enemy — actor Jon Pertwee.

The much-loved Time Lord suffered a heart attack in his sleep yesterday while on holiday in America with his wife Ingoborg. He was 76.

Pertwee, who played the Doctor for four years, was due to resume his one-man British tour this week and friends said he had not been ill.

Ingeborg was last night being comforted by relatives while the Couple's actor son Sean flew out to America. Daughter Daniel is also an actress.

Pertwee's showbusiness career spanned 60 years. But he will best be remembered for battling the evil allege as he travelled in his Tardis time machine In Dr Who and for playing scarecrow Worzel Gummidge.

His death comes just days before the BBC's new Dr Who film, starring Paul McGann, is shown on TV.

Last night, the world of showbusiness paid tribute to one of its best-loved stars.

Colin Baker, another Dr Who and a close friend, said: "Only this morning, I left a message on his answer-machine.

"I am devastated. He had such presence and stature. I can't believe he has gone — it is a great shock."

Actress Una Stubbs, who also starred in Worzel Gummidge, said: "I am absolutely shocked and saddened and my thoughts are now with his wife and children."

And Terry Wogan paid tribute to the actor's sense of humour.

He said, "He was a big man in every way, with a wonderful sense of fun."

Actor Richard Briers said Pertwee had been planning a new comedy radio series in which they were both to star.

He added. "We have lost a great personality — Jon was a one-off."

AT 6ft 2ins and with that distinctive shock of white hair, Pertwee had presence...plus sex appeal.

Whenever he walked into a room he seemed to fill it, looking the complete star.

His attractive second wife Ingeborg once confided to me that she had to use trickery to put off his shapely young admirers.

For although Jon frightened away the birds as TV's Worzel Gummidge he'd have had no difficulty pulling the human variety.

"If I thought they were taking too much interest I would shout over to him — and tell him it was time for his heart tablets," giggled Ingeborg.

In his 60 years in show-business Jon was far more than Dr Who and Worzel Gummidge.

His triumphs included hosting Sunday Night at the London Palladium and starring in the long-running hit radio show The Navy Lark.

But he always knew how he would be best remembered — and it did not bother him. "Its no good kidding myself.

And I've got no cause for complaint," he told me in one of his last interviews.

"I owe a great deal to the good doctor aid that scruffy old scarecrow.

"They have kept me gainfully employed for years."

Neither was he resentful at not being in the running to take the Time Lord into the 1990s.

He was happy to leave it to young Paul McGann.

"It was obvious that sex would rear its head for the first time," Pertwee said.

And he added — not very convincingly "And I am too long n the tooth for that."

WHO DARES WINS: Pertwee, as the Doctor, confronts a dreaded Dalek

TIME LORD: In the Tardis