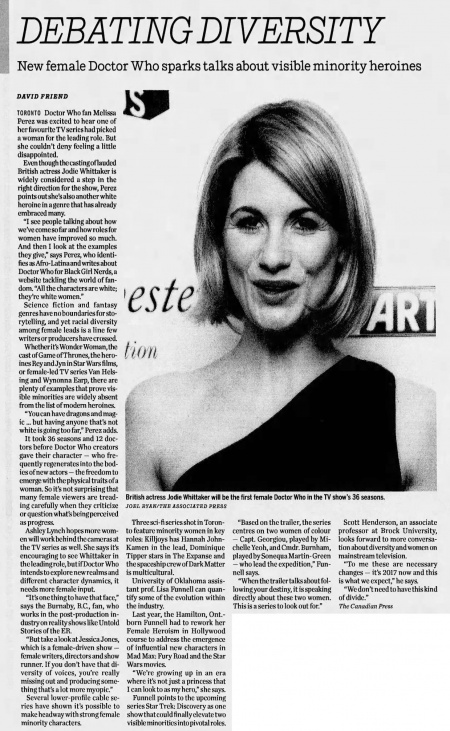 British actress Jodie Whittaker will be the first female Doctor Who in the TV show's 36 seasons.

TORONTO--Doctor Who fan Melissa Perez was excited to hear one of her favourite TV series had picked a woman for the leading role. But she couldn't deny feeling a little disappointed.

Even though the casting of lauded British actress Jodie Whittaker is widely considered a step in the right direction for the show, Perez points out she's also another white heroine in a genre that has already embraced many.

"I see people talking about how we've come so far and how roles for women have improved so much. And then I look at the examples they give," says Perez, who identifies as Afro-Latina and writes about Doctor Who for Black Girl Nerds, a website tackling the world of fan-dom. "All the characters are white; they're white women."

Science fiction and fantasy genres have no boundaries for storytelling, and yet racial diversity among female leads is a line few writers or producers have crossed.

Whether it's Wonder Woman, the cast of Game of Thrones, the heroines Rey and Jyn in Star Wars films, or female-led TV series Van Helsing and Wynonna Earp, there are plenty of examples that prove visible minorities are widely absent from the list of modern heroines.

"You can have dragons and magic ... but having anyone that's not white is going too far," Perez adds.

It took 36 seasons and 12 doctors before Doctor Who creators gave their character — who frequently regenerates into the bodies of new actors — the freedom to emerge with the physical traits of a woman. So it's not surprising that many female viewers are treading carefully when they criticize or question what's being perceived as progress.

Ashley Lynch hopes more women will work behind the cameras at the TV series as well. She says it's encouraging to see Whittaker in the leading role, but if Doctor Who intends to explore new realms and different character dynamics, it needs more female input.

"It's one thing to have that face," says the Burnaby, B.C., fan, who works in the post-production industry on reality shows like Untold Stories of the ER.

"But take a look at Jessica Jones, which is a female-driven show —female writers, directors and show runner. If you don't have that diversity of voices, you're really missing out and producing something that's a lot more myopic." Several lower-profile cable series have shown it's possible to make headway with strong female minority characters.

Three sci-fi series shot in Toronto feature minority women in key roles: Killjoys has Hannah John-Kamen in the lead, Dominique Tipper stars in The Expanse and the spaceship crew of Dark Matter is multicultural.

University of Oklahoma assistant prof. Lisa Funnell can quantify some of the evolution within the industry.

Last year, the Hamilton, Ont.-born Funnell had to rework her Female Heroism in Hollywood course to address the emergence of influential new characters in Mad Max: Fury Road and the Star Wars movies.

"We're growing up in an era where it's not just a princess that I can look to as my hero," she says.

Funnell points to the upcoming series Star Trek Discovery as one show that could finally elevate two visible minorities into pivotal roles.

"Based on the trailer, the series centres on two women of colour — Capt. Georgiou, played by Michelle Yeoh, and Cmdr. Burnham, played by Sonequa Martin-Green — who lead the expedition," Funnell says.

"When the trailer talks about following your destiny, it is speaking directly about these two women. This is a series to look out for."

Scott Henderson, an associate professor at Brock University, looks forward to more conversation about diversity and women on mainstream television.

"We don't need to have this kind of divide."