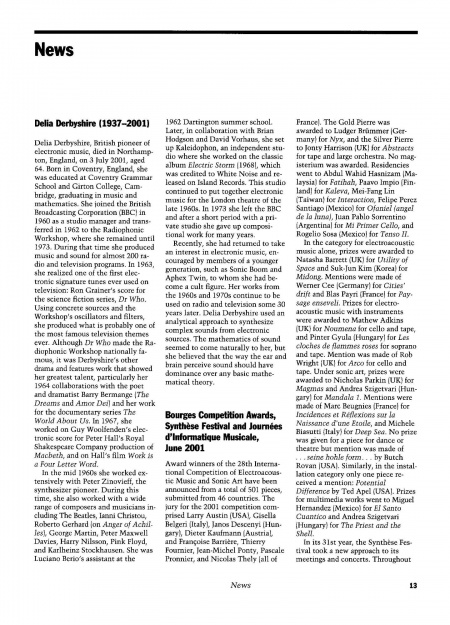 Delia Derbyshire, British pioneer of electronic music, died in Northampton, England, on 3 July 2001, aged 64. Born in Coventry, England, she was educated at Coventry Grammar School and Girton College, Cambridge, graduating in music and mathematics. She joined the British Broadcasting Corporation (BBC) in 1960 as a studio manager and transferred in 1962 to the Radiophonic Workshop, where she remained until 1973. During that time she produced music and sound for almost 200 radio and television programs. In 1963, she realized one of the first electronic signature tunes ever used on television: Ron Grainer's score for the science fiction series, Dr Who. Using concrete sources and the Workshop's oscillators and filters, she produced what is probably one of the most famous television themes ever. Although Dr Who made the Ra-diophonic Workshop nationally famous, it was Derbyshire's other drama and features work that showed her greatest talent, particularly her 1964 collaborations with the poet and dramatist Barry Bermange (The Dreams and Amor Dei) and her work for the documentary series The World About Us. In 1967, she worked on Guy Woolfenden's electronic score for Peter Hall's Royal Shakespeare Company production of Macbeth, and on Hall's film Work is a Four Letter Word.

In the mid 1960s she worked extensively with Peter Zinovieff, the synthesizer pioneer. During this time, she also worked with a wide range of composers and musicians including The Beatles, Ianni Christou, Roberto Gerhard (on Anger of Achilles), George Martin, Peter Maxwell Davies, Harry Nilsson, Pink Floyd, and Karlheinz Stockhausen. She was Luciano Berio's assistant at the 1962 Dartington summer school. Later, in collaboration with Brian Hodgson and David Vorhaus, she set up Kaleidophon, an independent studio where she worked on the classic album Electric Storm (1968), which was credited to White Noise and released on Island Records. This studio continued to put together electronic music for the London theatre of the late 1960s. In 1973 she left the BBC and after a short period with a private studio she gave up compositional work for many years.

Recently, she had returned to take an interest in electronic music, encouraged by members of a younger generation, such as Sonic Boom and Aphex Twin, to whom she had become a cult figure. Her works from the 1960s and 1970s continue to be used on radio and television some 30 years later. Delia Derbyshire used an analytical approach to synthesize complex sounds from electronic sources. The mathematics of sound seemed to come naturally to her, but she believed that the way the ear and brain perceive sound should have dominance over any basic mathematical theory.