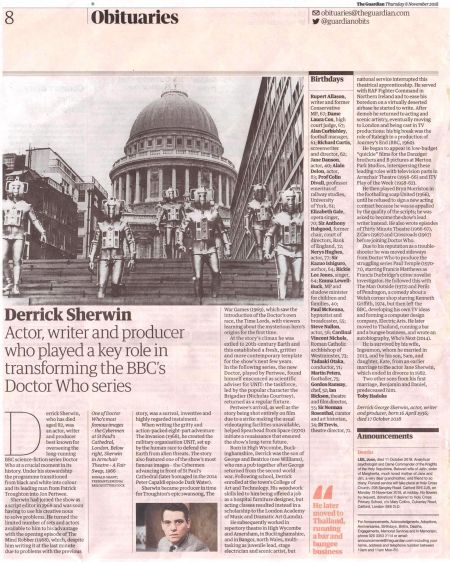 Actor, writer and producer who played a key role in transforming the BBC's Doctor Who series

Derrick Sherwin, who has died aged 82, was an actor, writer and producer best known for overseeing the long-running BBC science-fiction series Doctor Who at a crucial moment in its history. Under his stewardship the programme transitioned from black and white into colour and its leading man from Patrick Troughton into Jon Pertwee.

Sherwin had joined the show as a script editor in 1968 and was soon having to use his creative nous to solve problems. He turned the limited number of sets and actors available to him to his advantage with the opening episode of The Mind Robber (1968), which, despite him writing it at the last minute due to problems with the previous story, was a surreal, inventive and highly regarded instalment.

When writing the gritty and action-packed eight-part adventure The Invasion (1968), he created the military organisation UNIT, set up by the human race to defend the Earth from alien threats. The story also featured one of the show's most famous images - the Cybermen advancing in front of St Paul's Cathedral (later homaged in the 2014 Peter Capaldi episode Dark Water).

Sherwin became producer in time for Troughton's epic swansong, The War Games (1969), which saw the introduction of the Doctor's own race, the Time Lords, with viewers learning about the mysterious hero's origins for the first time.

At the story's climax he was exiled to 20th-century Earth and this established a fresh, grittier and more contemporary template for the show's next few years. In the following series, the new Doctor, played by Pertwee, found himself ensconced as scientific adviser for UNIT: the taskforce, led by the popular character the Brigadier (Nicholas Courtney), returned as a regular fixture.

Pertwee's arrival, as well as the story being shot entirely on film due to a strike making the usual videotaping facilities unavailable, helped Spearhead from Space (1970) initiate a renaissance that ensured the show's long-term future.

Born in High Wycombe, Buckinghamshire, Derrick was the son of George and Beatrice (nee Williams), who ran a pub together after George returned from the second world war. Following school, Derrick enrolled at the town's College of Art and Technology. His woodwork skills led to him being offered a job as a hospital furniture designer, but acting classes resulted instead in a scholarship to the London Academy of Music and Dramatic Art (Lamda).

He subsequently worked in repertory theatre in High Wycombe and Amersham, in Buckinghamshire, and in Bangor, north Wales, multitasking as juvenile lead, stage electrician and scenic artist, but national service interrupted this theatrical apprenticeship. He served with RAF Fighter Command in Northern Ireland and to ease his boredom on a virtually deserted airbase he started to write. After demob he returned to acting and scenic artistry, eventually moving to London and being cast in TV productions: his big break was the role of Raleigh in a production of Journey's End (BBC, 1960).

He began to appear in low-budget "quickie films for the Danziger brothers and B pictures at Merton Park Studios, interspersing these leading roles with television parts in Armchair Theatre (1958-66) and ITV Play of the Week (1958-62).

He then played Bryn Morriston in the footballing soap United (1966), until he refused to sign a new acting contract because he was so appalled by the quality of the scripts; he was asked to become the show's lead writer instead. He also wrote episodes of Thirty Minute Theatre (1966-67), Z Cars (1967) and Crossroads (1967) before joining Doctor Who.

Due to his reputation as a troubleshooter he was moved sideways from Doctor Who to produce the struggling series Paul Temple (1970-71), starring Francis Matthews as Francis Durbridge's crime novelist investigator. He followed this with The Man Outside (1972) and Perils of Pendragon, a comedy about a Welsh corner shop starring Kenneth Griffith, 1974, but then left the BBC, developing his own TV ideas and forming a computer design company, Electric Arts. He later moved to Thailand, running a bar and a bungee business, and wrote an autobiography, Who's Next (2014).

He is survived by his wife, Ingsumon, whom he married in 2013, and by his son, Sam, and daughter, Kate, from an earlier marriage to the actor Jane Sherwin, which ended in divorce in 1982.

Two other sons from his first marriage, Benjamin and Daniel, predeceased him.

Caption: One of Doctor Who's most famous images - the Cybermen at St Paul's Cathedral, London. Below right, Sherwin in Armchair Theatre - A Fair Swap, 1966