Designer who brought the Daleks to life 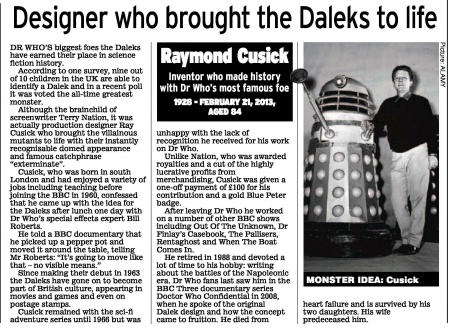 Inventor who made history with Dr Who's most famous foe

DR WHO'S biggest foes the Daleks have earned their place in science fiction history.

According to one survey, nine out of 10 children in the UK are able to identify a Dalek and in a recent poll it was voted the all-time greatest monster.

Although the brainchild of screenwriter Terry Nation, it was actually production designer Ray Cusick who brought the villainous mutants to life with their instantly recognisable domed appearance and famous catchphrase "exterminate".

Cusick, who was born in south London and had enjoyed a variety of jobs including teaching before joining the BBC in 1960, confessed that he came up with the idea for the Daleks after lunch one day with Dr Who's special effects expert Bill Roberts.

He told a BBC documentary that he picked up a pepper pot and moved it around the table, telling Mr Roberts: "It's going to move like that - no visible means."

Since making their debut in 1963 the Daleks have gone on to become part of British culture, appearing in movies and games and even on postage stamps.

Cusick remained with the sci-fi adventure series until 1966 but was unhappy with the lack of recognition he received for his work on Dr Who.

Unlike Nation, who was awarded royalties and a cut of the highly lucrative profits from merchandising, Cusick was given a one-off payment of £100 for his contribution and a gold Blue Peter badge.

After leaving Dr Who he worked on a number of other BBC shows including Out Of The Unknown, Dr Finlay's Casebook, The Pallisers, Rentaghost and When The Boat Comes In.

He retired in 1988 and devoted a lot of time to his hobby: writing about the battles of the Napoleonic era. Dr Who fans last saw him in the BBC Three documentary series Doctor Who Confidential in 2008, when he spoke of the original Dalek design and how the concept came to fruition. He died from heart failure and is survived by his two daughters. His wife predeceased him.