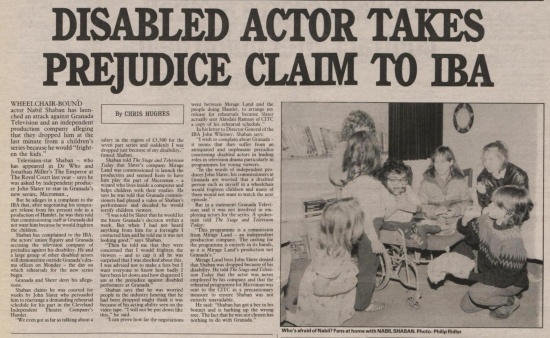 WHEELCHAIR-BOUND actor Nabil Shaban has launched an attack against Granada Television and an independent production company alleging that they dropped him at the last minute from a children's series because he would "frighten the kids."

Television-star Shaban — who has appeared in Dr Who and Jonathan Miller's The Emperor at The Royal Court last year — says he was asked by independent producer John Slater to star in Granada's new series, Microman.,

But he alleges in a complaint to the IBA that, after negotiating his temporary release from his present role in a production of Hamlet, he was then told that commissioning staff at Granada did not want him because he would frighten the children.

Shaban has complained to the IBA, the actors' union Equity and Granada accusing the television company of prejudice against his disability. He and a large group of other disabled actors will demonstrate outside Granada's drama offices on Monday — the day on which rehearsals for the new series begin.

Granada and Slater deny his allegations.

Shaban claims he was courted for weeks by John Slater who persuaded him to rearrange a demanding rehearsal schedule for his part in the Cleveland Independent Theatre Company's Hamlet.

"We even got as far as talking about a salary in the region of £3,500 for the seven part series and suddenly I was dropped just because of my disability," fumed Shaban.

Shaban told The Stage and Television Today that Slater's company Mirage Land was commissioned to launch the production and seemed keen to have him play the part of Microman — a wizard who lives inside a computer and helps children with their studies. He says he was told that Granada commissioners had played a video of Shaban's performance and decided he would terrify children viewers.

"I was told by Slater that he would let me know Granada's decision within a week. But when I had not heard anything from him for a fortnight I contacted him and he told me it was not looking good." says Shaban.

"Then he told me that they were concerned that I would frighten the viewers — and to cap it all he was surprised that 1 was shocked about this. I was advised not to make a fuss but I want everyone to know how badly I have been let down and how disgusted I am at the prejudice against disabled performers at Granada.

Shaban says that he was worried people in the industry hearing that he had been dropped might think it was because of his acting ability seen on the video tape. "I will not be put down like this," he said.

"I can prove how far the negotiations went between Mirage Land and the people doing Hamlet, to arrange my release for rehearsals because Slater actually sent Alasdair Ramsay of CITC a copy of his rehearsal schedule."

In his letter to Director General of the IBA John Whitney. Shaban says:

"I wish to complain about Granada it seems that they suffer from an antiquated and unpleasant prejudice concerning disabled actors in leading roles in television drama particularly in programmes for young viewers.

"In the words of independent producer John Slater, his commissioners at Granada are worried that a disabled person such as myself in a wheelchair would frighten children and many of them would not want to watch the next episode."

But in a statement Granada Television said it was not involved in employing actors for the series. A spokesman told The Stage and Television

Mirage Land boss John Slater denied that Shaban was dropped because of his disability. He told The Stage and Television Today that the actor was never employed by his company and that the rehearsal programme for Microman was sent to the CITC as a precautionary measure to ensure Shaban was not entirely unavailable.

He said: "Shaban has got a bee in his bonnet and is barking up the wrong tree. The fact that he was not chosen has nothing to do with Granada."