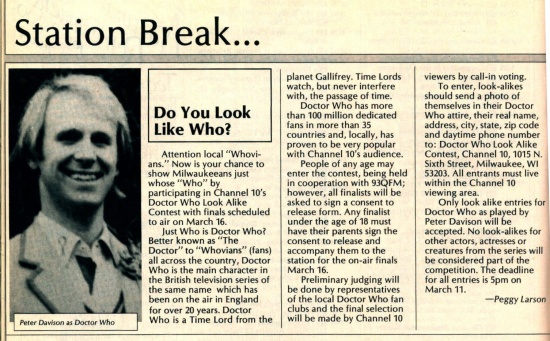 Attention local "Whovians." Now is your chance to show Milwaukeeans just whose "Who" by participating in Channel 10's Doctor Who Look Alike Contest with finals scheduled to air on March 16.

Just Who is Doctor Who? Better known as "The Doctor" to "Whovians" (fans) all across the country, Doctor Who is the main character in the British television series of the same name which has been on the air in England for over 20 years. Doctor Who is a Time Lord from the planet Gallifrey. Time Lords watch, but never interfere with, the passage of time.

Doctor Who has more than 100 million dedicated fans in more than 35 countries and, locally, has proven to be very popular with Channel 10's audience.

People of any age may enter the contest, being held in cooperation with 93QFM; however, all finalists will be asked to sign a consent to release form. Any finalist under the age of 18 must have their parents sign the consent to release and accompany them to the station for the on-air finals March 16.

Preliminary judging will be done by representatives of the local Doctor Who fan clubs and the final selection will be made by Channel 10 viewers by call-in voting.

To enter, look-alikes should send a photo of themselves in their Doctor Who attire, their real name, address, city, state, zip code and daytime phone number to: Doctor Who Look Alike Contest, Channel 10, 1015 N. Sixth Street, Milwaukee, WI 53203. All entrants must live within the Channel 10 viewing area.

Only look alike entries for Doctor Who as played by Peter Davison will be accepted. No look-alikes for other actors, actresses or creatures from the series will be considered part of the competition. The deadline for all entries is 5pm on March 11.