Doctor! It's The Daleks Again 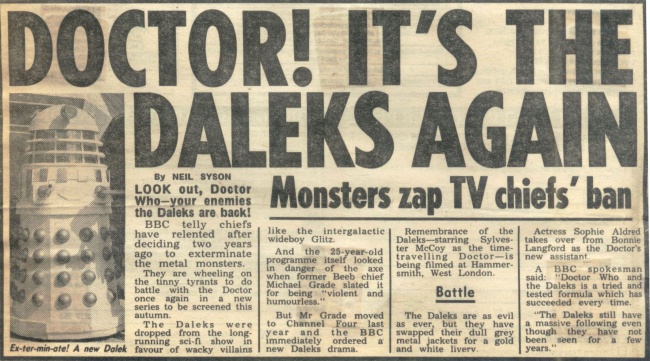 LOOK out, Doctor Who—your enemies the Daleks are back!

BBC telly chiefs have relented after deciding two years ago to exterminate the metal monsters.

They are wheeling on the tinny tyrants to do battle with the Doctor once again in a new series to be screened this autumn.

And the 25-year-old programme itself looked in danger of the axe when former Beeb chief Michael Grade slated it for being "violent and humourless."

Remembrance of the Daleks—starring Sylvester McCoy as the time-travelling Doctor—is being filmed at Hammersmith, West London.

The Daleks are as evil as ever, but they have swapped their dull grey metal jackets for a gold and white livery.

Actress Sophie Aldred takes over from Bonnie Langford as the Doctor's new assistant.

A BBC spokesman said: Doctor Who and the Daleks is a tried and tested formula which has succeeded every time.

"The Daleks still have a massive following even though they have not been seen for a few years."