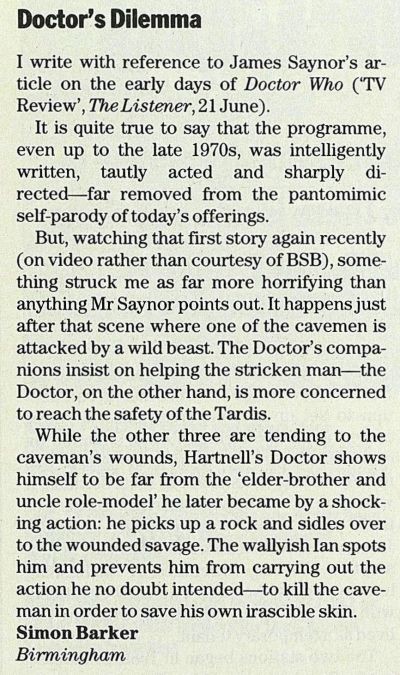 I write with reference to James Saynor's article on the early days of Doctor Who ('TV Review', The Listener, 21 June).

It is quite true to say that the programme, even up to the late 1970s, was intelligently written, tautly acted and sharply directed—far removed from the pantomimic self-parody of today's offerings.

But, watching that first story again recently (on video rather than courtesy of BSB), something struck me as far more horrifying than anything Mr Saynor points out. It happens just after that scene where one of the cavemen is attacked by a wild beast. The Doctor's companions insist on helping the stricken man—the Doctor, on the other hand, is more concerned to reach the safety of the Tardis.

While the other three are tending to the caveman's wounds, Hartnell's Doctor shows himself to be far from the 'elder-brother and uncle role-model' he later became by a shocking action: he picks up a rock and sidles over to the wounded savage. The wallyish Ian spots him and prevents him from carrying out the action he no doubt intended—to kill the caveman in order to save his own irascible skin.