Doctor's Orders: Get Away From It All 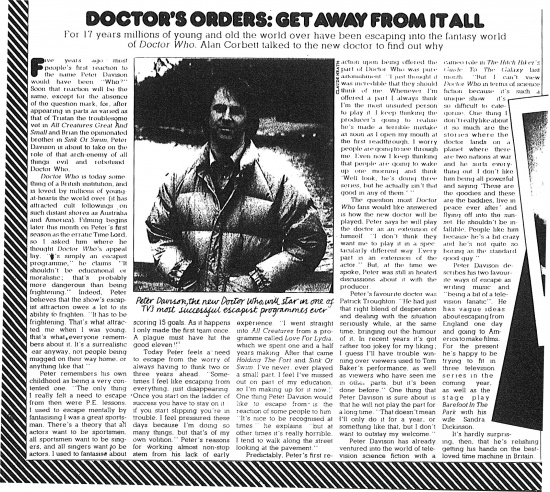 For 17 years millions of young and old the world over have been escaping into the fantasy world of Doctor Who. Alan Corbett talked to the new doctor to find out why

Five years ago - most people's first reaction to the name Peter Davison would have been "Who?" Soon that reaction will be the same, except for the absence of the question mark, for, after appearing in parts as varied as that of Tristan the troublesome vet in All Creatures Great And Small and Brian the opinionated brother in Sink Or Swim. Peter Davison is about to take on the role of that arch-enemy of all things evil and robotised Doctor Who.

Doctor Who is today something of a British institution. and is loved by millions of young-at-hearts the world over (it has attracted cult followings on such distant shores as Australia and America). Filming begins later this month on Peter's first season as the erratic Time Lord, so I asked him where he thought Doctor Who's appeal lay. "It's simply an escapist programme," he claims. 'It shouldn't be educational or moralistic; that's probably more dangerous than being frightening." Indeed. Peter believes that the show's escapist attraction owes a lot to its ability to frighten. "It has to be frightening. That's what attracted me when I was young, that's what everyone remembers about it. It's a surrealistic ear anyway, not people being mugged on their way home. or anything like that."

Peter remembers his own childhood as being a very contented one. "The only thing I really felt a need to escape from then were P.E. lessons. I used to escape mentally by fantasising I was a great sportsman. There's a theory that all actors want to be sportsmen. all sportsmen want to be singers, and all singers want to be actors. I used to fantasise about scoring 15 goals. As it happens I only made the first team once. A plague must have hit the good eleven!"

Today Peter feels a need to escape from the worry of always having to think two or three years ahead. "Sometimes I feel like escaping from everything. Just disappearing. Once you start on the ladder of success you have to stay on it if you start slipping you're in trouble. I feel pressured these days because I'm doing so many things. but that's of my own volition." Peter's reasons for working almost non-stop stem from his lack of early experience "I went straight into All Creatures from a programme called Love For Lydia. which we spent one and a half years making After that came Holding The Fort and Sink Or Swim. I've never, ever played a small part. I feel I've missed out on part of my education, so I'm making up for it now. One thing Peter Davison would like to escape from is the reaction of some people to him. "It's nice to be recognised at times," he explains "but at other times it's really horrible. I tend to walk along the street looking at the pavement."

Predictably, Peter's first reaction upon being offered the part of Doctor Who was pure astonishment "I just thought it was incredible that they should think of me. Whenever I'm offered a pail l always think I'm the most unsuited person to play it I keep thinking the producer's going to realise he's made a terrible mistake as soon as I open my mouth at the first readthrough. I worry people are going to see through me. Even now I keep thinking that people are going to wake up one morning and think 'Well look, he's doing three series, but he actually isn't that good in any of them.'"

The question most Doctor Who fans would like answered is how the new doctor will be played. Peter says he will play the doctor as an extension of himself. "I don't think they want me to play it in a spectacularly different way. Every part is an extension of the actor." But at the time we spoke, Peter was still in heated discussions about it with the producer.

Peter's favourite doctor was Patrick Troughton. "He had just that right blend of desperation and dealing with the situation seriously while, at the same lime. bringing out the humour of it. In recent years it's got rather too jokey for my liking; I guess I'll have trouble winning over viewers used to Tom Baker's performance as well as viewers who have seen me other parts, but it's been done before." One thing that Peter Davison is sure about is that he will not play the part for a long time. "That doesn't mean I'll only do it for a year, or something like that, but I don't want to outstay my welcome."

Peter Davison has already ventured into the world of television science fiction with a cameo in The Hitch Hiker's Guide to the Galaxy last mouth "But I can't view Doctor Who in terms of science fiction because it's such a unique show it's so difficult to categorise. One thing I don't really like about it so much are the stories where the doctor lands on a planet where there are two nations at war and he sorts everything out. I don't like him being all-powerful and saying 'These are the goodies and these are the baddies, live in peace ever after' and flying off into the sunset. He shouldn't be infallible. People like him because he's a bit crazy and he's not quite so boring as the standard good guy."

Peter Davison describes his two favourite ways of escape as writing music and "being a bit of a television fanatic". He has vague ideas about escaping from England one day and going to America to make films. For the present he's happy to be trying to fit in three television series in the coming year, as well as the stage play Barefoot In The Park with his wife Sandra Dickinson. It's hardly surprising, then, that he's relishing getting his hands on the best-loved time machine in Britain.

Caption: Peter Davison, the new Doctor Who, will star in one of TV's most successful escapist programmes ever