Doctor, who's that old girl? 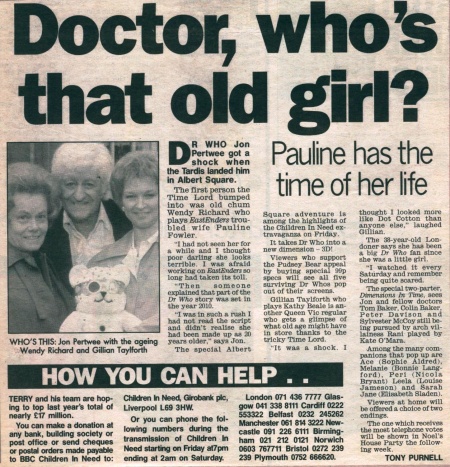 Pauline has the time of her life

DR WHO Jon Pertwee got a shock when the Tardis landed him in Albert Square.

"I had not seen her for a while and I thought poor darling she looks terrible. I was afraid working on EastEnders so long had taken its toll.

"Then someone explained that part of the Dr Who story was set in the year 2010.

"I was in such a rush I had not read the script and didn't realise she had been made up as 20 years older," says Jon.

The special Albert Square adventure is among the highlights of the Children In Need extravaganza on Friday.

It takes Dr Who into a new dimension - 3D!

Viewers who support the Pudsey Bear appeal by buying special 99p specs will see all five surviving Dr Whos pop out of their screens.

Gillian Taylforth who plays Kathy Beale is another Queen Vic regular who gets a glimpse of what old age might have in store thanks to the tricky Time Lord.

"It was a shock. I thought I looked more like Dot Cotton than anyone else," laughed Gillian.

The 38-year-old Londoner says she has been a big Dr Who fan since she was a little girl.

"I watched it every Saturday and remember being quite scared.

Viewers at home will be offered a choice of two endings.

The one which receives the most telephone votes will be shown in Noel's House Party the following week.

Caption: WHO'S THIS: Jon Pertwee with the ageing Wendy Richard and Gillian Taylforth