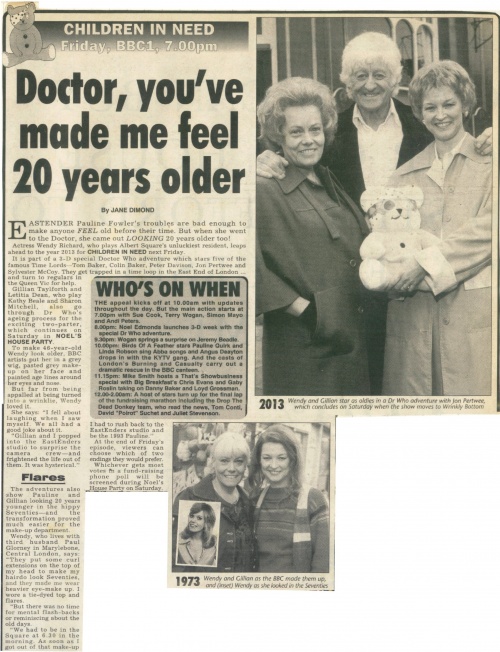 EASTENDER Pauline Fowler's troubles are bad enough to make anyone FEEL old before their time. But when she went to the Doctor, she came out LOOKING 20 years older too! Actress Wendy Richard, who plays Albert Square's unluckiest resident, leaps ahead to the year 2013 for CHILDREN IN NEED next Friday.

It is part of a 3-D special Doctor Who adventure which stars five of the famous Time Lords--Tom Baker, Colin Baker, Peter Davison, Jon Pertwee and Sylvester McCoy. They get trapped in a time loop in the East End of London and turn to regulars in the Queen Vie for help.

Gillian Taylforth and Letitia Dean, who play Kathy Beale and Sharon Mitchell, also go through Dr Who's ageing process for the exciting two-parter, which continues on Saturday in NOEL'S HOUSE PARTY.

To make 46-year-old Wendy look older, BBC artists put her in a grey wig, pasted grey makeup on her face and painted age lines around her eyes and nose.

But far from being appalled at being turned into a wrinklie, Wendy loved it.

She says: "I fell about laughing when I saw myself. We all had a good joke about it.

"Gillian and I popped into the EastEnders studio to surprise the camera crew—and frightened the life out of them. It was hysterical."

The adventures also show Pauline and Gillian looking 20 years younger in the hippy Seventies—and the transformation proved much easier for the make-up department.

Wendy, who lives with third husband Paul Glorney in Marylebone, Central London, says: "They put some curl extensions on the top of my head to make my hairdo look Seventies, and they made me wear -heavier eye-make up. I wore a tie-dyed top and flares.

"But there was no time for mental flash-backs or reminiscing about the old days.

"We had to be in the Square at 6.30 in the morning. As soon as I got out of that make-up I had to rush back to the EastEnders studio and be the 1993 Pauline."

At the end of Friday's episode, viewers can choose which of two endings they would prefer. Whichever gets most votes it a fund-raising phone poll will be screened during Noel's House Party on Saturday.

1973 Wendy and Gillian as the BBC made them up, IP and (inset) Wendy as she looked in the Seventies

2013 Wendy and Gillian star as oldies in a Dr Who adventure with Jon Pertwee, which concludes on Saturday when the show moves to Wrinkly Bottom

THE appeal kicks off at 10.00am with updates throughout the day. But the main action starts at 7.00pm with Sue Cook, Terry Wogan, Simon Mayo and Andi Peters.

9.30pm: Wogan springs a surprise on Jeremy Beadle. 10.00pm: Birds Of A Feather stars Pauline Quirk and Linda Robson sing Abba songs and Angus Deayton drops in with the KYTV gang. And the casts of London's Burning and Casualty carry out a dramatic rescue in the BBC canteen.

12.00-2.00am: A host of stars turn up for the final lap of the fundraising marathon including the Drop The Dead Donkey team, who read the news, Tom Conti, David "Poirot" Suchet and Juliet Stevenson.