Doctor: It's still just monsters and me 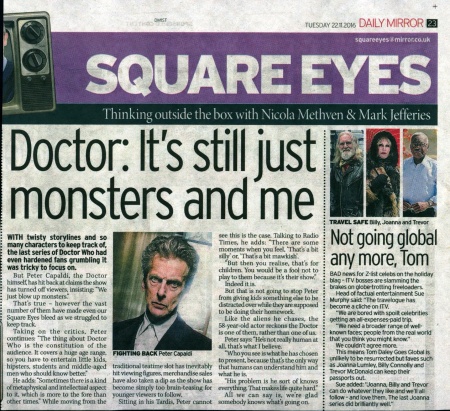 WITH twisty storylines and so many characters to keep track of, the last series of Doctor Who had even hardened fans grumbling it was tricky to focus on.

But Peter Capaldi, the Doctor himself, has hit back at claims the show has turned off viewers, insisting: "We just blow up monsters:

That's true - however the vast number of them have made even our Square Eyes bleed as we struggled to keep track.

Taking on the critics, Peter continues: "The thing about Doctor Who is the constitution of the audience. It covers a huge age range, so you have to entertain little kids, hipsters, students and middle-aged men who should know better:

He adds: "Sometimes there is a kind of metaphysical and intellectual aspect to it, which-is more to the fore than other times' While moving from the traditional teatime slot has inevitably hit viewing figures, merchandise sales have also taken a dip as the show has become simply too brain-teasing for younger viewers to follow.

Sitting in his Tardis, Peter cannot see this is the case. Talking to Radio Times, he adds: "There are some moments when you feel, 'That's a bit silly' or, 'That's a bit mawkish'.

"But then you realise, that's for children. You would be a fool not to play to them because it's their show:'

But that is not going to stop Peter from giving kids something else to be distracted over while they are supposed to be doing their homework.

Like the aliens he chases, the 58-year-old actor reckons the Doctor is one of them, rather than one of us.

Peter says: "He's not really human at all, that's what I believe.

"Who you see is what he has chosen to present, because that's the only way that humans can understand him and what he is.

"His problem is he sort of knows everything. That makes life quite hard:"

All we can say is, we're glad somebody knows what's going on.