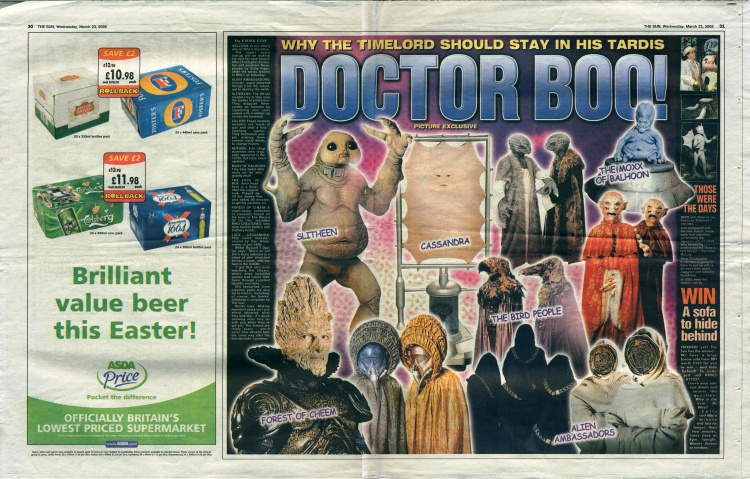 Why the Timelord should stay in his Tardis

WELCOME to our who's who of Who's monsters

The super scary line-up will be making life hell for new Doctor Who Christopher Eccles-ton and assistant Rose, played by Billie Piper, when the series returns to BBC1 on Saturday:

ALIEN AMBASSADORS: Sinister, super-powered beings from the future, out to destroy the earth.

SLITHEENS: The 8ft tall invaders try to take over the bodies of politicians. They disguise themselves as humans by squeezing into suits sealed with a hidden zip across the forehead.

GELTHS: These invisible invaders are made of gas and emit a foul-smelling vapour.

AUTONS: Evil shop dummies who originally appeared in the 1970s but have been updated.

MOXX OF BALHOON: Tiny blue beast who rests on an antigravity chair.

THE FACE OF BOE: Alien head held in a fluid-filled life-support tank. Played by 3ft 8in Jimmy Vee. who needs 90 minutes to get his costume on.

FOREST OF CHEEM: A super-scary collection of creatures based on the trees in The Wizard Of Oz film. Includes BIRD CREATURES, who have human bodies and feathery heads.

Writer Russell T Davies says: "She's so old she's been reduced to a piece of skin stretched across a frame, with her face in the middle.

I got that idea from watching the Oscars, where once beautiful women had ruined their faces through constant facelifts and diets."

Old favourites from previous years are also set to return - including, of course, the Daleks, following a campaign by The Sun.

HERE are some of our favourite Timelord's old foes.

And compared with the new bunch, these were real sweeties particularly the liquorice allsort robot who fiendishly confronted the show's last Doctor Sylvester McCoy.

Pour Christopher Eccleston is going to have to put up with lot more than giant maggots and rubbery lizardmen.

A sofa to hide behind

TERRIFIED yet? The Sun has the answer. We have a large Epsom sofa from MFI worth £595 for you to win - and hide behind! To enter just call

Leave your contact details and answer this question: Who is the new Dr Who?