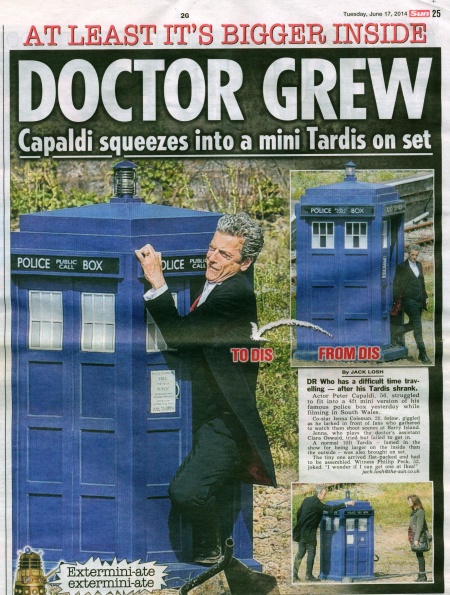 AT LEAST IT'S BIGGER INSIDE

Capaldi squeezes into a mini Tardis on set

TO DIS FROM DIS

DR Who has a difficult time travelling — after his Tardis shrank.

Actor Peter Capaldi, 56, struggled to fit into a 4ft mini version of his famous police box yesterday while filming in South Wales.

Co-star Jenna Coleman, 28, below, giggled as he larked in front of fans who gathered to watch them shoot scenes at Barry Island.

Jenna, who plays the doctor's assistant Clara Oswald, tried but failed to get in.

A normal 10ft Tardis — famed in the show for being larger on the inside than the outside — was also brought on set.

The tiny one arrived flat-packed and had to be assembled. Witness Phillip Peck, 52, joked: I wonder if I can get one at Ikea!"