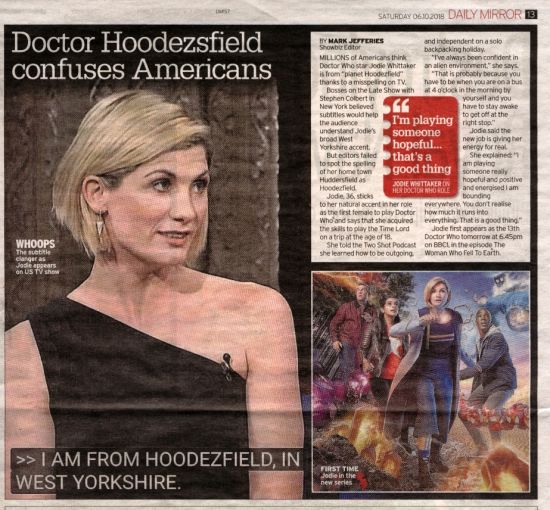 MILLIONS of Americans think Doctor Who star Jodie Whittaker is from "planet Hoodezfield" thanks to a misspelling on TV.

But editors failed to spot the spelling of her home town Huddersfield as Hoodezfield.

Jodie, 36, sticks to her natural accent in her role as the first female to play Doctor Whdand says that she acquired the skills to play the Time Lord on a trip at the age of 18.

She told the Two Shot Podcast she learned how to be outgoing, and independent on a solo backpacking holiday.

"I've always been confident in an alien environment:. she says. "That is probably because you have to be when you are on a bus at 4 o'clock in the morning by yourself and you have to stay awake to get off at the right stop."

Jodie said the new job is giving her energy for real.

She explained: "I am playing someone really hopeful and positive and energised I am bounding everywhere. You don't realise how much it runs into everything. That is a good thing."

Jodie first appears as the 13th Doctor Who tomorrow at 6.45pm on BBC1, in the episode The Woman Who Fell To Earth.

Caption: WHOOPS The subtitle clanger as Jodie appears on US TV show