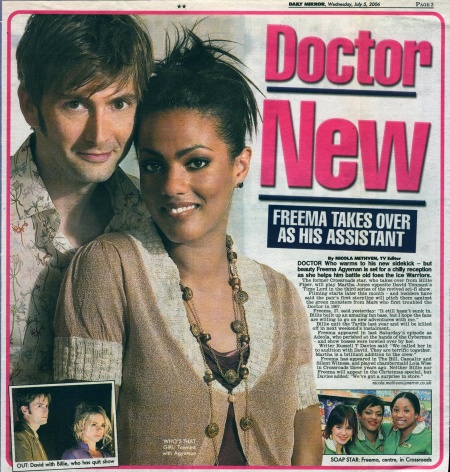 FREEMA TAKES OVER AS HIS ASSISTANT

DOCTOR Who warms to his new sidekick — but beauty Freema Agyeman is set for a chilly reception as she helps him battle old foes the Ice Warriors.

The former Crossroads star, who takes over from Billie Piper, will play Martha Jones opposite David Tennant's Time Lord in the third series of the revived sci-fi show. Filming starts later this month - and insiders have said the pair's first storyline will pitch them against the green monsters from Mars who first troubled the Doctor in 1967.

Freema, 27, said yesterday: "It still hasn't sunk in. Billie built up an amazing fan base. but I hope the fans are willing to go on new adventures with me." Billie quit the Tardis last year and will be killed off in next weekend's instalment.

Freema appeared in last Saturday's episode as Adeola, who perished at the hands of the Cybermen - and show bosses were bowled over by her.

Writer Russell T Davies said: "We called her in to audition with David. They are terrific together. Martha is a brilliant addition to the crew." Freema has appeared in The Bill. Casualty and Silent Witness, and played chambermaid Lola Wise in Crossroads three years ago. Neither Billie nor Freema will appear in the Christmas special, but Davies added: "We've got a surprise in store.-

OUT: David with Billie, who has quit show