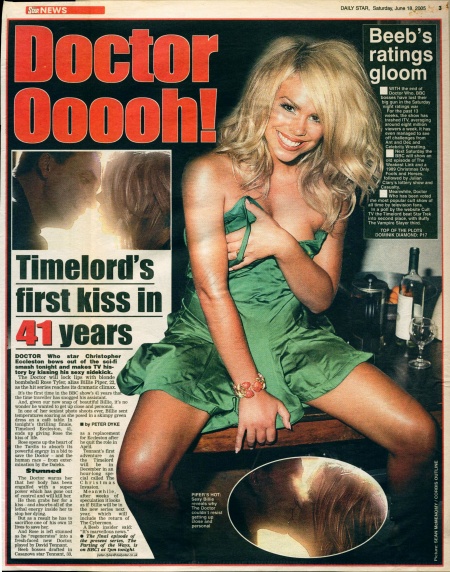 U by Peter Dyke

DOCTOR Who star Christopher Eccleston bows out of the sci-fi smash tonight and makes TV history by kissing his sexy sidekick. The Doctor will lock lips with blonde bombshell Rose Tyler, alias Billie Piper, 22, as the hit series reaches its dramatic climax.

It's the first time in the BBC show's 41 years that the time traveller has snogged his assistant. And, given our new snap of beautiful Billie, it's no wonder he wanted to get up close and personal. In one of her sexiest photo shoots ever, Billie sent temperatures soaring as she posed in a skimpy green dress on a café table. In tonight's thrilling finale, Timelord Eccleston, 41, ends up giving Rose the kiss of life.

Rose opens up the heart of the Tardis to absorb its powerful energy in a bid to save the Doctor - and the human race - from extermination by the Daleks.

The Doctor warns her that her body has been engulfed with a super power which has gone out of control and will kill her.

He then grabs her for a kiss - and absorbs all of the lethal energy inside her to stop her dying.

But as a result he has to sacrifice one of his own 13 lives to save her.

And Rose is left stunned as he "regenerates" into a fresh-faced new Doctor, played by David Tennant.

Beeb bosses drafted in Casanova star Tennant, 33, as a replacement for Eccleston after he quit the role in April.

Tennant's first adventure as the Timelord will be in December in an hour-long special called The Christmas Invasion.

Meanwhile, after weeks of speculation it looks as if Billie will be in the new series next year, which will include the return of The Cybermen.

• The final episode of the present series, The Parting of the Ways, is on BBC1 at 7pm tonight.

Caption: PIPER'S HOT: Sexy Billie reveals why The Doctor couldn't resist getting up close and personal

In a poll by the website Cult TV the Timelord beat Star Trek into second place, with Buffy The Vampire Slayer third.