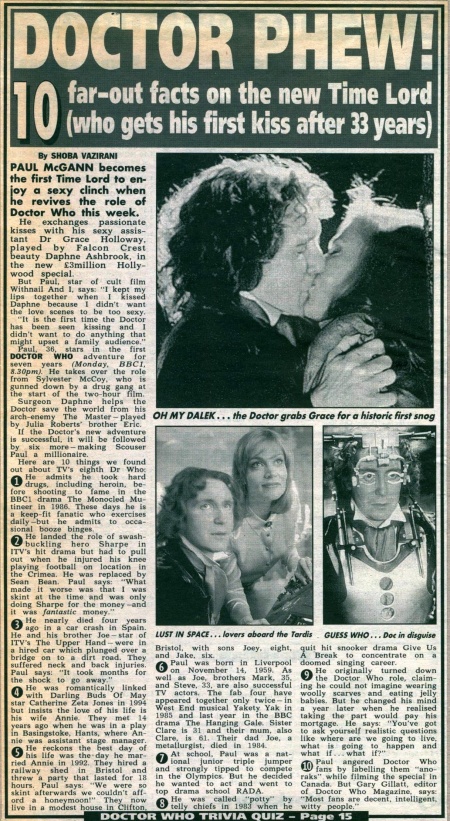 PAUL McGANN becomes the first Time Lord to enjoy a sexy clinch when he revives the role of Doctor Who this week.

But Paul, star of cult film Withnail And I, says: "I kept my lips together when 1 kissed Daphne because I didn't want the love scenes to be too sexy.

"It is the first time the Doctor has been seen kissing and I didn't want to do anything that might upset a family audience."

Paul, 36, stars in the first DOCTOR WHO adventure for seven years (Monday, BBC1, 8.30pm). He takes over the role from Sylvester McCoy, who is gunned down by a drug gang at the start of the two-hour film.

Surgeon Daphne helps the Doctor save the world from his arch-enemy The Master — played by Julia Roberts' brother Eric.

If the Doctor's new adventure is successful, it will be followed by six more — making Scouser Paul a millionaire.

Here are 10 things we found out about TV's eighth Dr Who:

OH MY DALEK ... the Doctor grabs Grace for a historic first snog

LUST IN SPACE ... lovers aboard the Tardis

GUESS WHO . .. Doc in disguise