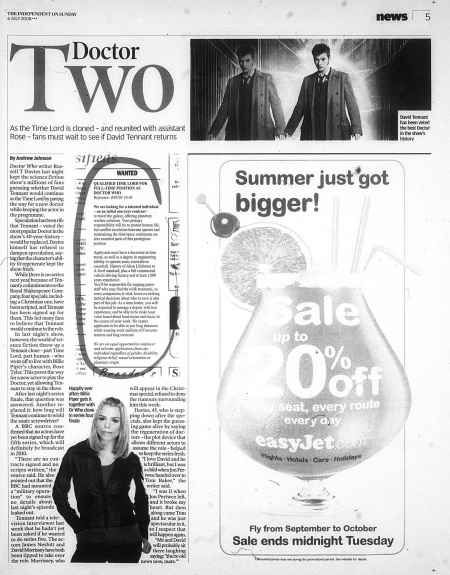 Doctor Who writer Russell T Davies last night kept the science fiction show's millions of fans guessing whether David Tennant would continue as the Time Lord by paving the way for a new doctor while keeping the actor in the programme.

Speculation has been rife that Tennant - voted the most popular Doctor in the show's 40-year-history - would be replaced. Davies himself has refused to dampen speculation, saying that the character's ability to regenerate kept the show fresh.

While there is no series next year because of Tennant's commitments to the Royal Shakespeare Company, four specials, including a Christmas one, have been scripted, and Tennant has been signed up for them. This led many fans to believe that Tennant would continue in the role.

In last night's show, however, the world of science fiction threw up a Tennant clone - part Time Lord, part human - who went off to live with Billie Piper's character, Rose Tyler. This paves the way for a new actor to play the Doctor, yet allowing Tennant to stay in the show.

After last night's series finale, that question was answered. Another replaced it: how long will Tennant continue to wield the sonic screwdriver?

A BBC source confirmed that no actors have yet been signed up for the fifth series, which will definitely be broadcast in 2010.

"There are no contracts signed and no scripts written," the source said. He also pointed out that the BBC had mounted a "military operation" to ensure no details about last night's episode leaked out.

Tennant told a television interviewer last week that he hadn't yet been asked if he wanted to do series five. The actors James Nesbitt and David Morrissey have both been tipped to take over the role. Morrissey, who will appear in the Christmas special, refused to deny the rumours surrounding him this week.

Davies, 45, who is stepping down after the specials, also kept the guessing game alive by saying the regeneration of doctors - the plot device that allows different actors to assume the role - helped to keep the series fresh. "I love David and he is brilliant, but I was a child when Jon Pertwee handed over to Tom Baker," the writer said.

"I was 11 when Jon Pertwee left, and it broke my heart. But then along came Tom and he was just spectacular in it, so I suspect that will happen again.

"Me and David will probably sit there laughing saying: 'You're old news now, mate.'"