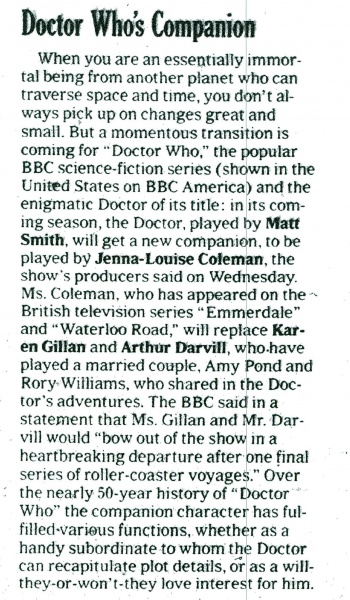 When you are an essentially immortal being from another planet who can traverse space and time, you don't always pick up on changes great and small. But a momentous transition is coming for "Doctor Who," the popular BBC science-fiction series (shown in the United States on BBC America and the enigmatic Doctor of its title: in its coming season, the Doctor, played by Matt Smith, will get a new companion, to be played by Jenna-Louise Coleman, the show's producers said on Wednesday. Ms. Coleman, who has appeared on the British television series "Emmerdale" and "Waterloo Road," will replace Karen Gillan and Arthur Darvill, who have played a married couple, Amy Pond and Rory Williams, who shared in the Doctor's adventures. The BBC said in a statement that Ms. Gillan and Mr. Darvill would "bow out of the show in a heartbreaking departure after one final series of roller-coaster voyages." Over the nearly 50-year history of "Doctor Who" the companion character has fulfilled various functions, whether as a handy subordinate to whom the Doctor can recapitulate plot details, or as a will-they-or-won't they love interest for him.