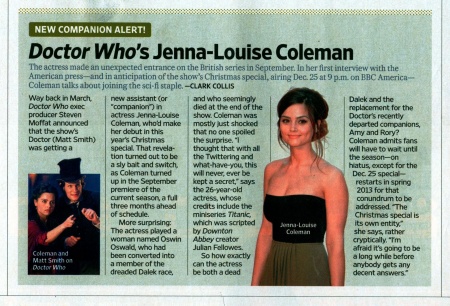 Way back in March, Doctor Who exec producer Steven Moffat announced that the show's Doctor (Matt Smith) was getting a new assistant (or "companion") in actress Jenna-Louise Coleman, who'd make her debut in this year's Christmas special. That revelation turned out to be a sly bait and switch, as Coleman turned up in the September premiere of the current season, a full three months ahead of schedule.

More surprising: The actress played a woman named Oswin Oswald, who had been converted into a member of the dreaded Dalek race, and who seemingly died at the end of the show. Coleman was mostly just shocked that no one spoiled the surprise. "I thought that with all the Twittering and what-have-you, this will never, ever be kept a secret," says the 26-year-old actress, whose credits include the miniseries Titanic, which was scripted by Downton Abbey creator Julian Fellowes.

The actress made an unexpected entrance on the British series in September. In her first interview with the American press—and in anticipation of the show's Christmas special, airing Dec. 25 at 9 p.m. on BBC America—Coleman talks about joining the sci-fi staple.

So how exactly can the actress be both a dead Dalek and the replacement for the Doctor's recently departed companions, Amy and Rory? Coleman admits fans will have to wait until the season—on hiatus, except for the Dec. 25 special—restarts in spring 2013 for that conundrum to be addressed. "The Christmas special is its own entity," she says, rather cryptically. "I'm afraid it's going to be a long while before anybody gets any decent answers."

Coleman and Matt Smith on Doctor Who