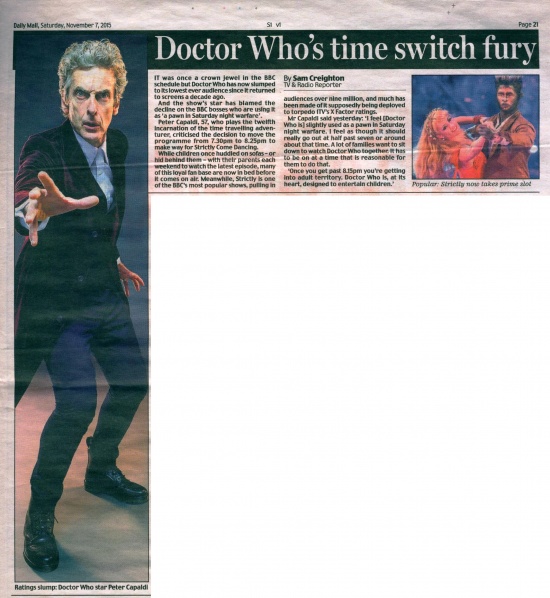 IT was once a crown jewel in the BBC schedule but Doctor Who has now slumped to Its lowest ever audience since It returned to screens a decade ago.

And the show's star has blamed the decline on the BBC bosses who are using it as 'a pawn in Saturday night warfare'.

Peter Capaldi, 57, who plays the twelfth incarnation of the time travelling adventurer, criticised the decision to move the programme from 7.30pm to 8.25pm to make way for Strictly Come Dancing.

While children once huddled on sofas - or hid behind them - with their parents each weekend to watch the latest episode, many of this loyal fan base are now in bed before it comes on air. Meanwhile, Strictly is one of the BBC's most popular shows, pulling in audiences over nine million, and much has been made of it supposedly being deployed to torpedo ITV's X Factor ratings.

Mr Capaldi said yesterday: 'I feel [Doctor Who is] slightly used as a pawn in Saturday night warfare. I feel as though it should really go out at half past seven or around about that time. A lot of families want to sit down to watch Doctor Who together. It has to be on at a time that is reasonable for them to do that. 'Once you get past 8.15pm you're getting into adult territory. Doctor Who is, at its heart, designed to entertain children.'