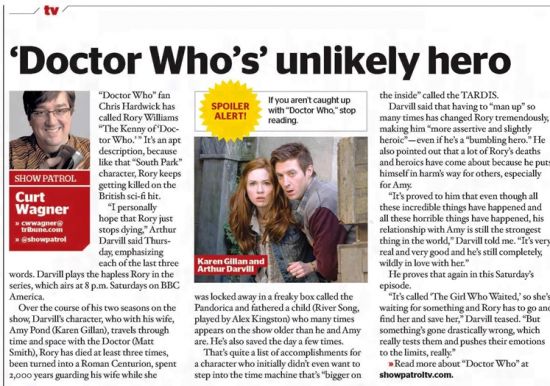 "Doctor Who" fan Chris Hardwick has called Rory Williams "The Kenny of 'Doctor Who.'" It's an apt description, because like that "South Park" character, Rory keeps getting killed on the British sci-fi hit.

"I personally hope that Rory just stops dying," Arthur Darvill said Thursday, emphasizing each of the last three words. Duval plays the hapless Rory in the series, which airs at 8 p.m. Saturdays on BBC America.

Over the course of his two seasons on the show, Darvill's character, who with his wife, Amy Pond (Karen Gillan), travels through time and space with the Doctor (Matt Smith), Rory has died at least three times, been turned into a Roman Centurion, spent 2,000 years guarding his wife while she was locked away in a freaky box called the Pandorica and fathered a child (River Song, played by Alex Kingston) who many times appears on the show older than he and Amy are. He's also saved the day a few times.

That's quite a list of accomplishments for a character who initially didn't even want to step into the time machine that's "bigger on the inside" called the TARDIS.

Darvill said that having to "man up" so many times has changed Rory tremendously, making him "more assertive and slightly heroic" — even if he's a "bumbling hero." He also pointed out that a lot of Rory's deaths and heroics have come about because he puts himself in harm's way for others, especially for Amy.

He proves that again in this Saturdays episode.

"It's called 'The Girl Who Waited,' so she's waiting for something and Rory has to go and find her and save her," Darvill teased. "But something's gone drastically wrong, which really tests them and pushes their emotions to the limits, really."

» Read more about "Doctor Who" at showpatroltv.com.

If you aren't caught up with "Doctor Who," stop reading.