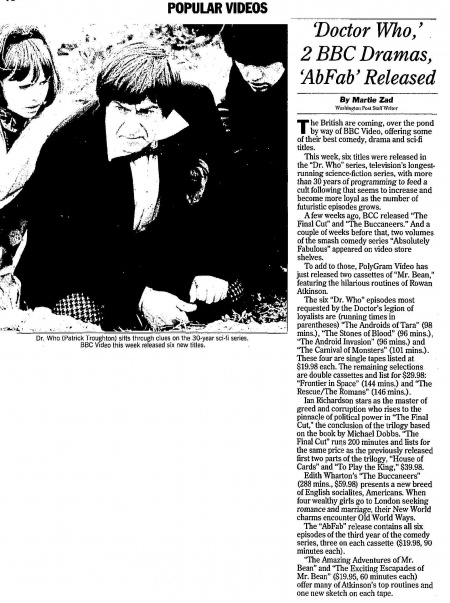 The British are coming, over the pond I by way of BBC Video, offering some of their best comedy, drama and sci-fi titles.

This week, six titles were released in the "Dr. Who" series, television's longest-running science-fiction series, with more than 30 years of programming to feed a cult following that seems to increase and become more loyal as the number of futuristic episodes grows.

A few weeks ago, BBC released "The Final Cut" and "The Buccaneers." And a couple of weeks before that, two volumes of the smash comedy series "Absolutely Fabulous" appeared on video store shelves.

To add to those, PolyGram Video has just released two cassettes of "Mr. Bean," featuring the hilarious routines of Rowan Atkinson.

The six "Dr. Who" episodes most requested by the Doctor's legion of loyalists are (running times in parentheses) "The Androids of Tara" (98 mins.), "The Stones of Blood" (96 mins.), "The Android Invasion" (96 mins.) and "The Carnival of Monsters" (101 mins.). These four are single tapes listed at $19.98 each. The remaining selections are double cassettes and list for $29.98: "Frontier in Space" (144 mins.) and 'The Rescue/The Romans" (146 mins.). Ian Richardson stars as the master of greed and corruption who rises to the pinnacle of political power in "The Final Cut," the conclusion of the trilogy based on the book by Michael Dobbs. "The Final Cut" runs 200 minutes and lists for the same price as the previously released first two parts of the trilogy, "House of Cards" and "To Play the King," $39.98. Edith Wharton's 'The Buccaneers" (288 mins., $59.98) presents a new breed of English socialites, Americans. When four wealthy girls go to London seeking romance and marriage, their New World charms encounter Old World Ways. The "AbFab" release contains all six episodes of the third year of the comedy series, three on each cassette ($19.98, 90 minutes each).

"The Amazing Adventures of Mr. Bean" and 'The Exciting Escapades of Mr. Bean" ($19.95, 60 minutes each) offer many of Atkinson's top routines and one new sketch on each tape.