Doctor Who, when & why 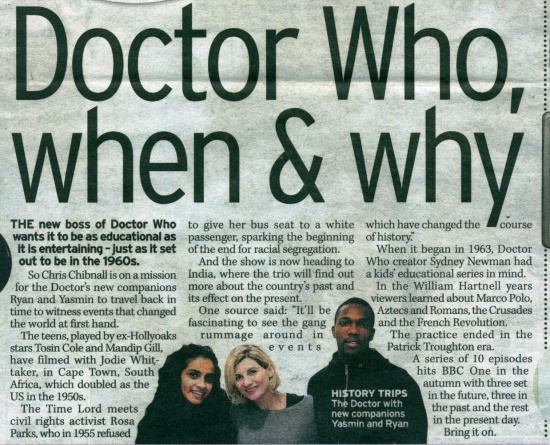 THE new boss of Doctor Who wants it to be as educational as it is entertaining - just as it set out to be in the 1960s.

So Chris Chibnall is on a mission for the Doctor's new companions Ryan and Yasmin to travel back in time to witness events that changed the world at first hand.

The teens, played by ex-Hollyoaks stars Tosin Cole and Mandip Gill, have filmed with Jodie Whittaker, in Cape Town, South Africa, which doubled as the US in the 1950s.

The Time Lord meets civil rights activist Rosa Parks, who in 1955 refused to give her bus seat to a white passenger, sparking the beginning of the end for racial segregation.

And the show is now heading to India, where the trio will find out more about the country's past and its effect on the present.

One source said: "It'll be fascinating to see the gang rummage around in events which have changed the course of history:

When it began in 1963, Doctor Who creator Sydney Newman had a kids' educational series in mind.

In the William Hartnell years viewers learned about Marco Polo, Aztecs and Romans, the Crusades and the French Revolution.

The practice ended in the Patrick Troughton era.

A series of 10 episodes hits BBC One in the autumn with three set in the future, three in the past and the rest in the present day.