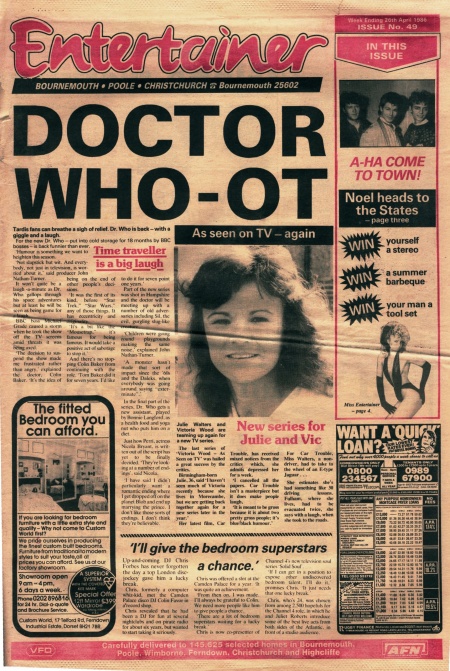 Time traveller is a big laugh

Tardis fans can breathe a sigh of relief. Dr. Who is back - with a giggle and a laugh.

For the new Dr. Who - put into cold storage for 18 months by BBC bosses - is back funnier than ever. 'Humour is something we want to heighten this season.

'Not slapstick but wit. And everybody, not just in television, is worried about it,' said producer John Nathan-Turner.

It won't quite be a laugh -a-minute as Dr. Who gallops through his space adventures but at least he will be seen as being game for a laugh.

BBC boss Michael Grade caused a storm when he took the show off the TV screens amid threats it was being axed.

'The decision to suspend the show made me frustrated rather than angry,' explained the doctor, Colin Baker.

'It's the idea of The myth on the end of other people's decisions.

'It was the first of its kind, before "Star Trek," "Star Wars," any of those things. It has eccentricity and originality.

But it's a bit like the "Mousetrap," it's famous for being famous. It would take a positive act of sabotage to stop it.

And there's no stopping Colin Baker from continuing with the role. 'Tom Baker did it for seven years. I'd like to do it for seven point one years.'

Part of the new series was shot in Hampshire and the doctor will be meeting up with a number of old adversaries including Sil, the But evil gurgling slog like creature.

'A monster hasn't made that sort of impact since the sixties and the Daleks, when everybody was going around saying "exterminate".'

In the final part of the series, Dr. Who gets a new assistant, played by Bonnie Langford, as a health food nut who puts him on a diet.

Just how Peri, actress Nicola Bryant, is written out of the script has yet to be finally decided. 'They're looking at a number of endings,' said Nicola.

'I haven't said I didn't particularly want a romantic ending where I get dropped off on the planet Blob and end up marrying the prince. I don't like those sorts of the endings. I don't think they are believable.