Doctor Who: A Christmas Carol 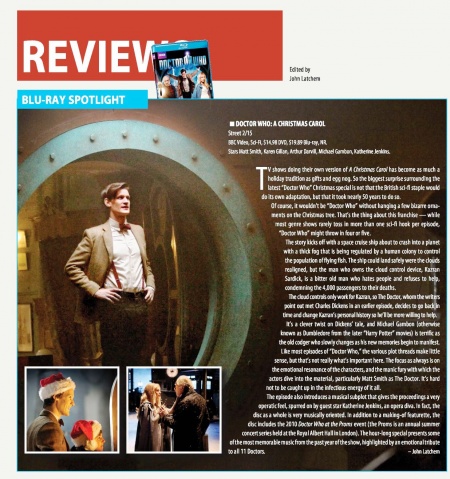 TV shows doing their own version of A Christmas Carol has become as much a holiday tradition as gifts and egg nog. So the biggest surprise surrounding the latest "Doctor Who" Christmas special is not that the British sci-fi staple would do its own adaptation, but that it took nearly 50 years to do so.

Of course, it wouldn't be "Doctor Who" without hanging a few bizarre ornaments on the Christmas tree. That's the thing about this franchise — while most genre shows rarely toss in more than one sci-fi hook per episode, "Doctor Who" might throw in four or five.

The story kicks off with a space cruise ship about to crash into a planet with a thick fog that is being regulated by a human colony to control the population of flying fish. The ship could land safely were the clouds realigned, but the man who owns the cloud control device, Kazran Sardick, is a bitter old man who hates people and refuses to help, condemning the 4,000 passengers to their deaths.

The cloud controls only work for Kazran, so The Doctor, whom the writers point out met Charles Dickens in an earlier episode, decides to go back in time and change Kazran's personal history so he'll be more willing to help. It's a clever twist on Dickens' tale, and Michael Gambon (otherwise known as Dumbledore from the later "Harry Potter" movies) is terrific as the old codger who slowly changes as his new memories begin to manifest. Like most episodes of "Doctor Who," the various plot threads make little sense, but that's not really what's important here. The focus as always is on the emotional resonance of the characters, and the manic fury with which the actors dive into the material, particularly Matt Smith as The Doctor. It's hard not to be caught up in the infectious energy of it all.

The episode also introduces a musical subplot that gives the proceedings a very operatic feel, spurred on by guest star Katherine Jenkins, an opera diva. In fact, the disc as a whole is very musically oriented. In addition to a making-of featurette, the disc includes the 2010 Doctor Who at the Prams event (the Proms is an annual summer concert series held at the Royal Albert Hall in London). The hour-long special presents some of the most memorable music from the past year of the show, highlighted by an emotional tribute to all 11 Doctors.