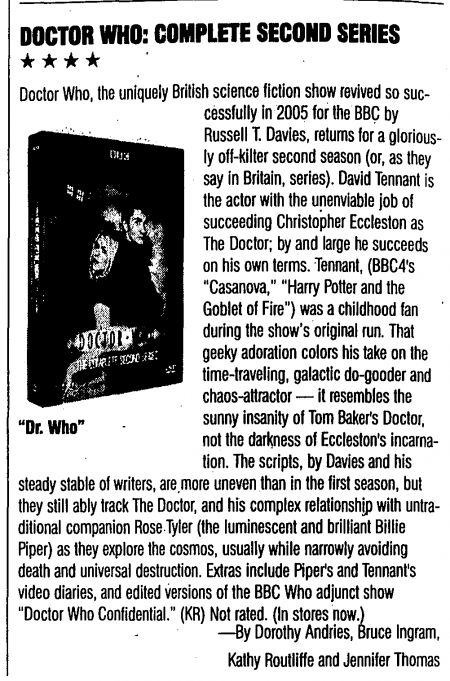 Doctor Who, the uniquely British science fiction show revived so successfully in 2005 for the BBC by Russell T. Davies, returns for a gloriously off-kilter second season (or, as they say in Britain, series). David Tennant is the actor with the unenviable job of succeeding Christopher Eccleston as The Doctor; by and large he succeeds on his own terms. Tennant, (BBC4's "Casanova," "Harry Potter and the Goblet of Fire") was a childhood fan during the show's original run. That geeky adoration colors his take on the time-traveling, galactic do-gooder and chaos-attractor — it resembles the sunny insanity of Tom Baker's Doctor, not the darkness of Eccleston's incarnation. The scripts, by Davies and his steady stable of writers, are, more uneven than in the first season, but they still ably track The Doctor, and his complex relationship with untraditional companion Rose Tyler (the luminescent and brilliant Billie Piper) as they explore the cosmos, usually while narrowly avoiding death and universal destruction. Extras include Piper's and Tennant's video diaries, and edited versions of the BBC Who adjunct show "Doctor Who Confidential." (KR) Not rated. (In stores now.)