Doctor Who: Destiny of the Doctors 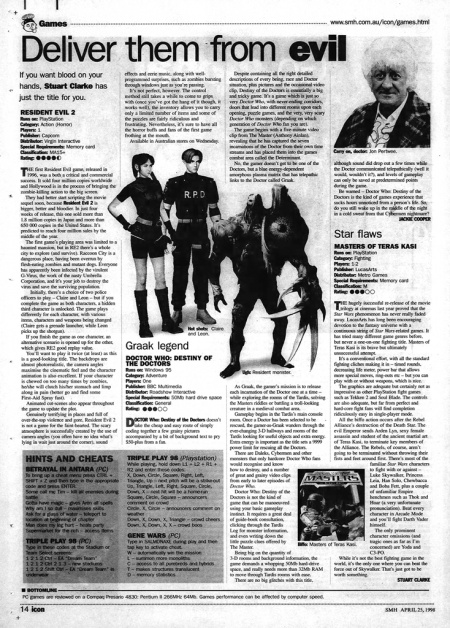 Doctor Who: Destiny of the Doctors

DOCTOR Who: Destiny of the Doctors doesn't take the cheap and easy route of simply coding together a few grainy pictures accompanied by a bit of background text to pry $50-plus from a fan.

Despite containing all the right detailed descriptions of every being, race and Doctor situation, plus pictures and the occasional video clip, Destiny of the Doctors is essentially a big and tricky game. It's a game which is just so very Doctor Who, with never-ending corridors, doors that lead into different rooms upon each opening, puzzle games, and the very, very scary Doctor Who monsters (depending on which generation of Doctor Who fan you are).

The game begins with a five-minute video clip from The Master (Anthony Ainlan), revealing that he has captured the seven incarnations of the Doctor from their own time streams and has placed them into the games combat area called the Determinant.

No, the gamer doesn't get to be one of the Doctors, but a blue energy-dependent amorphous plasma matrix that has telepathic links to the Doctor called Graak.

As Graak, the gamer's mission is to release each incarnation of the Doctor one at a time — while exploring she rooms of the Tardis, solving the Masters riddles or battling a troll-looking creature in a medieval combat area.

Gameplay begins in the Tardis's main console room. Once a Doctor has been selected to be rescued, the gamer-as-Graak wanders through the ever-changing 3-D hallways and rooms of the Tardis looking for useful objects and extra energy. Extra energy is important as the title sets a 9999 power limit for rescuing all the Doctors.

There are Daleks, Cybermen and other monsters that only hardcore Doctor Who fans would recognise and know how to destroy, and a number of great and grainy video clips from early to later episodes of Doctor Who.

Doctor Who: Destiny of the Doctors is not the kind of game that can be manoeuvred using your basic gameplay instinct. It requires a great deal of guide-book consultation, clicking through the Tardis Log for monster information, and even writing down the little puzzle clues offered by The Master.

Being big on the quantity of 3-D rooms and background information, the game demands a whopping 50Mb hard-drive space, and really needs more than 32Mb RAM to move through Tardis rooms with ease.

There are no big glitches with this title, although sound did drop out a few times while the Doctor communicated telepathically (well it would, wouldn't it?), and levels of gameplay can only be saved at predetermined points during the game.

Be warned — Doctor Who: Destiny of the Doctors is the kind of games experience that sucks hours unnoticed from a person's life. So, do you still wake up in the middle of the night in a cold sweat from that Cybermen nightmare?