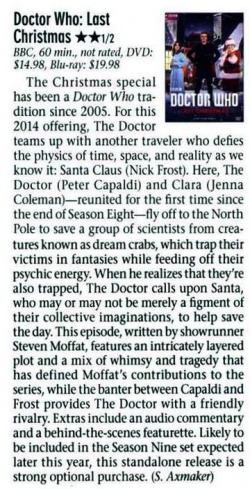 The Christmas special has been a Doctor Who tradition since 2005. For this 2014 offering, The Doctor teams up with another traveler who defies the physics of time, space, and reality as we know it: Santa Claus (Nick Frost). Here, The Doctor (Peter Capaldi) and Clara (Jenna Coleman)—reunited for the first time since the end of Season Eight—fly off to the North Pole to save a group of scientists from creatures known as dream crabs, which trap their victims in fantasies while feeding off their psychic energy. When he realizes that they're also trapped, The Doctor calls upon Santa, who may or may not be merely a figment of their collective imaginations, to help save the day. This episode, written by showrunner Steven Moffat, features an intricately layered plot and a mix of whimsy and tragedy that has defined Moffat's contributions to the series, while the banter between Capaldi and Frost provides The Doctor with a friendly rivalry. Extras include an audio commentary and a behind-the-scenes featurette. Likely to be included in the Season Nine set expected later this year, this standalone release is a strong optional purchase. (S. Axmaker)