Doctor Who: The Complete Seventh Series (2013) 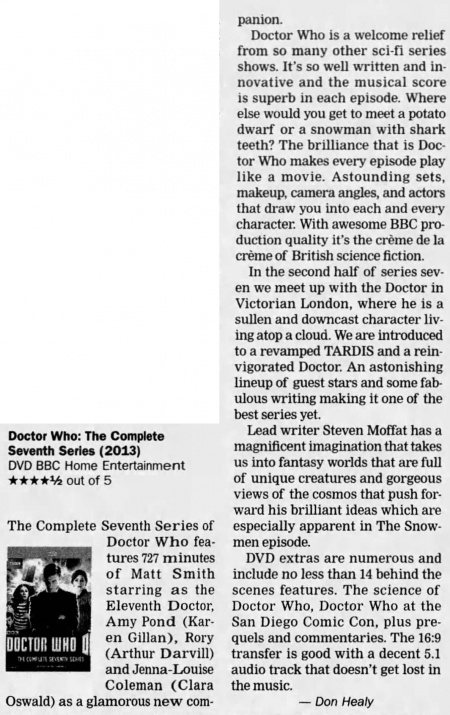 Doctor Who is a welcome relief from so many other sci-fi series shows. It's so well written and innovative and the musical score is superb in each episode. Where else would you get to meet a potato dwarf or a snowman with shark teeth? The brilliance that is Doctor Who makes every episode play like a movie. Astounding sets, makeup, camera angles, and actors that draw you into each and every character. With awesome BBC production quality it's the crème de la crème of British science fiction.

In the second half of series seven we meet up with the Doctor in Victorian London, where he is a sullen and downcast character living atop a cloud. We are introduced to a revamped TARDIS and a reinvigorated Doctor. An astonishing lineup of guest stars and some fabulous writing making it one of the best series yet.

Lead writer Steven Moffat has a magnificent imagination that takes us into fantasy worlds that are full of unique creatures and gorgeous views of the cosmos that push forward his brilliant ideas which are especially apparent in The Snowmen episode.

DVD extras are numerous and include no less than 14 behind the scenes features. The science of Doctor Who, Doctor Who at the San Diego Comic Con, plus prequels and commentaries. The 16:9 transfer is good with a decent 5.1 audio track that doesn't get lost in the music.