Doctor Who: The Sixties 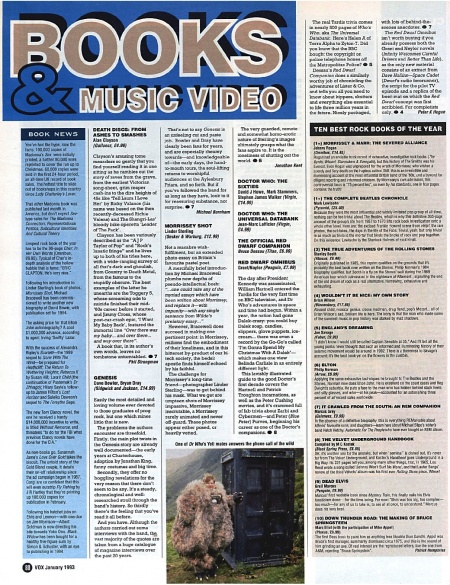 DOCTOR WHO: THE SIXTIES

The day after President Kennedy was pasassinated, William Hartnell entered the Tardis for the very first time on BBC television, and Dr Who's adventures in space and time had begun. Within a year. the nation bad gone Dalek-crazy you could buy Dalek soap, candles, slippers, glove puppets, ice-cream— there was even a record by the Go-Go's called 'I'm Gonna Spend My Christmas With A Dalek'—which makes one view Belinda Carlisle in an entirely different light.

This lavishly illustrated guide to the good Doctor's first decade covers the Hartnell and Patrick Troughton incarnations, as well as the Peter Cushing movies, and it's crammed full of fob trivia about Zarbi and Cybermen—and Peter (Blue Peter) Purves, beginning his career as one of the Doctor's companions. • 8

The real Tardis trivia comes in nearly 500 pages of Who's Who, aka The Universal Databank. Here's Helen A of Terra Alpha to Zyton-7. Did you know that the BBC bought the copyright on police telephone boxes off the Metropolitan Police? • 5

Caption: One of Dr Who's Yeti mates answers the phone call of the wild