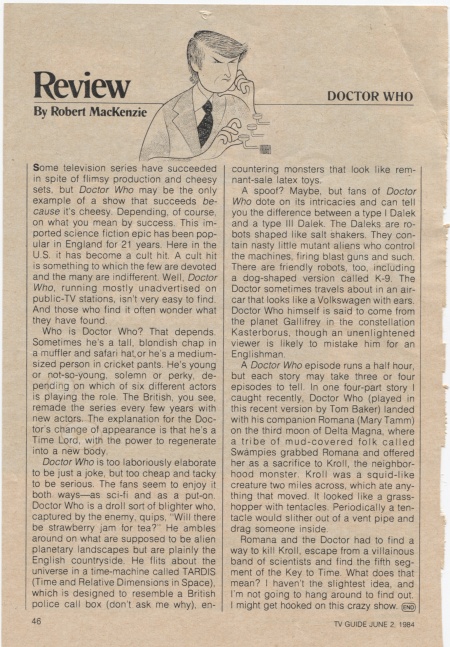 Some television series have succeeded in spite of flimsy production and cheesy sets, but Doctor Who may be the only example of a show that succeeds because it's cheesy. Depending, of course, on what you mean by success. This imported science fiction epic has been popular in England for 21 years. Here in the U.S. it has become a cult hit. A cult hit is something to which the few are devoted and the many are indifferent. Well, Doctor Who, running mostly unadvertised on public-TV stations, isn't very easy to find. And those who find it often wonder what they have found.

Who is Doctor Who? That depends. Sometimes he's a tall, blonidish chap in a muffler and safari hat, or he's a medium-sized person in cricket pants. He's young or not-so-young, solemn or perky, depending on which of six different actors is playing the role. The British, you see, remade the series every few years with new actors. The explanation for the Doctor's change of appearance is that he's a Time Lord, with the power to regenerate into a new body. Doctor Who is too laboriously elaborate to be just a joke, but too cheap and tacky to be serious. The fans seem to enjoy it both ways—as sci-fi and as a put-on. Doctor Who is a droll sort of blighter who, captured by the enemy, quips, "Will there be strawberry jam for tea?" He ambles around on what are supposed to be alien planetary landscapes but are plainly the English countryside. He flits about the universe in a time-machine called TARDIS (Time and Relative Dimensions in Space), which is designed to resemble a British police call box (don't ask me why), en-countering monsters that look like remnant-sale latex toys.

A spoof? Maybe, but fans of Doctor Who dote on its intricacies and can tell you the difference between a type I Dalek and a type III Dalek. The Daleks are robots shaped like salt shakers. They contain nasty little mutant aliens who control the machines, firing blast guns and such. There are friendly robots, too, including a dog-shaped version called K-9. The Doctor sometimes travels about in an aircar that looks like a Volkswagen with ears. Doctor Who himself is said to come from the planet Gallifrey in the constellation Kasterborus, though an unenlightened viewer is likely to mistake him for an Englishman.

A Doctor Who episode runs a half hour, but each story may take three or four episodes to tell. In one four-part story I caught recently, Doctor Who (played in this recent version by Tom Baker) landed with his companion Romana (Mary Tamm) on the third moon of Delta Magna, where a tribe of mud-covered folk called Swampies grabbed Romana and offered her as a sacrifice to Kroll, the neighborhood monster. Kroll was a squid-like creature two miles across, which ate anything that moved. It looked like a grasshopper with tentacles. Periodically a tentacle would slither out of a vent pipe and drag someone inside.

Romana and the Doctor had to find a way to kill Kroll, escape from a villainous band of scientists and find the fifth segment of the Key to Time. What does that mean? I haven't the slightest idea, and I'm not going to hang around to find out. I might get hooked on this crazy show.