Doctor Who - The Ultimate Adventure 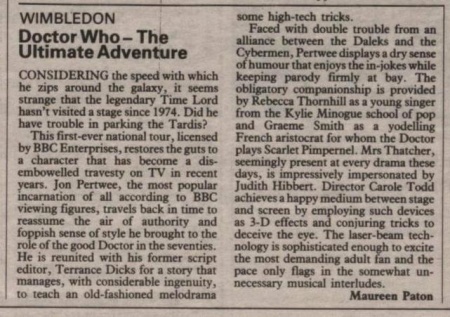 CONSIDERING the speed with which he zips around the galaxy, it seems strange that the legendary Time Lord hasn't visited a stage since 1974. Did he have trouble in parking the Tardis?

This first-ever national tour, licensed by BBC Enterprises, restores the guts to a character that has become a disembowelled travesty on TV in recent years. Jon Pertwee, the most popular incarnation of all according to BBC viewing figures, travels back in time to reassume the air of authority and foppish sense of style he brought to the role of the good Doctor in the seventies. He is reunited with his former script editor, Terrance Dicks for a story that manages, with considerable ingenuity, to teach an old-fashioned melodrama some high-tech tricks.

Faced with double trouble from an alliance between the Daleks and the Cybermen, Pertwee displays a dry sense of humour that enjoys the in-jokes while keeping parody firmly at bay. The obligatory companionship is provided by Rebecca Thornhill as a young singer from the Kylie Minogue school of pop and Graeme Smith as a yodelling French aristocrat for whom the Doctor plays Scarlet Pimpernel. Mrs Thatcher, seemingly present at every drama these days. is impressively impersonated by Judith Hibbert. Director Carole Todd achieves a happy medium between stage and screen by employing such devices as 3-D effects and conjuring tricks to deceive the eye. The laser-beam technology is sophisticated enough to excite the most demanding adult tan and the pace only flags in the somewhat unnecessary musical interludes.