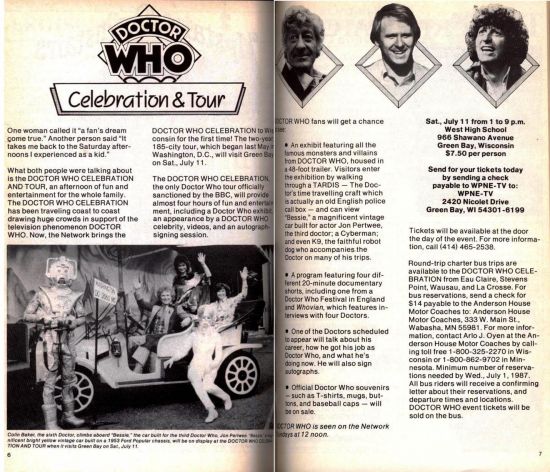 One woman called it "a fan's dream come true." Another person said "It takes me back to the Saturday afternoons I experienced as a kid."

The DOCTOR WHO CELEBRATION, the only Doctor Who tour officially sanctioned by the BBC, will provide almost four hours of fun and entertainment, including a Doctor Who exhibit, an appearance by a DOCTOR WHO celebrity, videos, and an autograph-signing session.

DOCTOR WHO fans will get a chance

• An exhibit featuring all the famous monsters and villains from DOCTOR WHO, housed in a48-foot trailer. Visitors enter the exhibition by walking through a TARDIS — The Doctor's time travelling craft which is actually an old English police call box — and can view "Bessie," a magnificent vintage car built for actor Jon Pertwee, the third doctor; a Cyberman; and even K9, the faithful robot dog who accompanies the Doctor on many of his trips.

• A program featuring four different 20-minute documentary shorts, including one from a Doctor Who Festival in England and Whovian, which features interviews with four Doctors.

• One of the Doctors scheduled to appear will talk about his career, how he got his job as Doctor Who, and what he's doing now. He will also sign autographs.

• Official Doctor Who souvenirs — such as T-shirts, mugs, buttons. and baseball caps — will be on sale.

DOCTOR WHO is seen on the Network Sundays at 12 noon.

Send for your tickets today

by sending a check

Caption: Colin Baker, the sixth Doctor, climbs aboard "Bessie," the car built for the third Doctor Who, Jon Pertwee. "Bessie," a bright yellow vintage car built on a 1953 Ford Popular chassis, will be on display at the DOCTOR WHO CELEBRATION AND TOUR when it visits Green Bay on Sat., July 11.