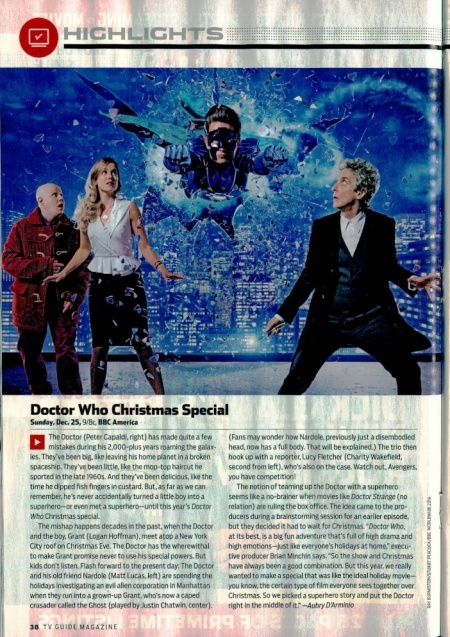 The Doctor (Peter Capaldi, right) has made quite a few mistakes during his 2,000-plus years roaming the galaxies. They've been big, like leaving his home planet in a broken spaceship. They've been little, like the mop-top haircut he sported in the late 1960s. And they've been delicious, like the time he dipped fish fingers in custard. But, as far as we can remember, he's never accidentally turned a little boy into a superhero—or even met a superhero—until this year's Doctor Who Christmas special.

The mishap happens decades in the past, when the Doctor and the boy, Grant (Logan Hoffman), meet atop a New York City roof on Christmas Eve. The Doctor has the wherewithal to make Grant promise never to use his special powers. But kids don't listen. Flash forward to the present day: The Doctor and his old friend Nardole (Matt Lucas, left) are spending the holidays investigating an evil alien corporation in Manhattan when they run into a grown-up Grant, who's now a caped crusader called the Ghost (played by Justin Chatwin, center).

(Fans may wonder how Nardole, previously just a disembodied head, now has a full body. That will be explained.) The trio then hook up with a reporter, Lucy Fletcher (Charity Wakefield, second from left), who's also on the case. Watch out, Avengers, you have competition!

The notion of teaming up the Doctor with a superhero seems like a no-brainer when movies like Doctor Strange (no relation) are ruling the box office. The idea came to the producers during a brainstorming session for an earlier episode, but they decided it had to wait for Christmas. "Doctor Who, at its best, is a big fun adventure that's full of high drama and high emotions—just like everyone's holidays at home," executive producer Brian Minchin says. "So the show and Christmas have always been a good combination. But this year, we really wanted to make a special that was like the ideal holiday movie—you know, the certain type of film everyone sees together over Christmas. So we picked a superhero story and put the Doctor right in the middle of it."