Doctor Who Coming To Athens 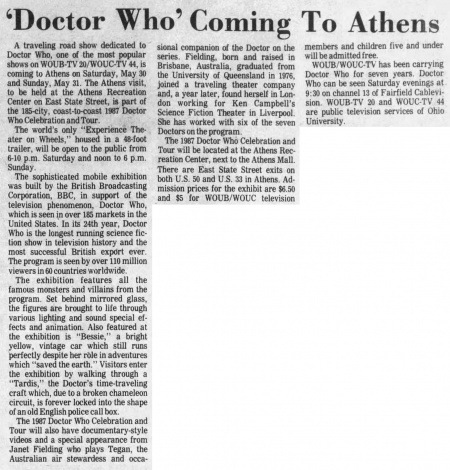 A traveling road show dedicated to Doctor Who, one of the most popular shows on WOUB-TV 20/WOUC-TV 44, is coming to Athens on Saturday, May 30 and Sunday, May 31. The Athens visit, to be held at the Athens Recreation Center on East State Street, is part of the 185-city, coast-to-coast 1987 Doctor Who Celebration and Tour.

The world's only "Experience Theater on Wheels," housed in a 48-foot trailer, will be open to the public from 6-10 p.m. Saturday and noon to 6 p.m. Sunday.

The sophisticated mobile exhibition was built by the British Broadcasting Corporation, BBC, in support of the television phenomenon, Doctor Who, which is seen in over 185 markets in the United States, In its 24th year, Doctor Who is the longest running science fiction show in television history and the most successful British export ever. The program is seen by over 110 million viewers in 60 countries worldwide.

The exhibition features all the famous monsters and villains from the program. Set behind mirrored glass, the figures are brought to life through various lighting and sound special effects and animation. Also featured at the exhibition is "Bessie," a bright yellow, vintage car which still runs perfectly despite her role in adventures which "saved the earth." Visitors enter the exhibition by walking through a "Tardis," the Doctor's time-traveling craft which, due to a broken chameleon circuit, is forever locked into the shape of an old English police call box.

The 1987 Doctor Who Celebration and Tour will also have documentary-style videos and a special appearance from Janet Fielding who plays Tegan, the Australian air stewardess and occasional companion of the Doctor on the series. Fielding, born and raised in Brisbane, Australia, graduated from the University of Queensland in 1976, joined a traveling theater company and, a year later, found herself in London working for Ken Campbell's Science Fiction Theater in Liverpool. She has worked with six of the seven Doctors on the program.

The 1987 Doctor Who Celebration and Tour will be located at the Athens Recreation Center, next to the Athens Mall. There are East State Street exits on both U.S. 50 and U.S. 33 in Athens. Admission prices for the exhibit are $6.50 and $5 for WOUB/WOUC television members and children five and under will be admitted free.

WOUB/WOUC-TV has been carrying Doctor Who for seven years. Doctor Who can be seen Saturday evenings at 9:30 on channel 13 of Fairfield Cablevision. WOUB-TV 20 and WOUC-TV 44 are public television services of Ohio University.