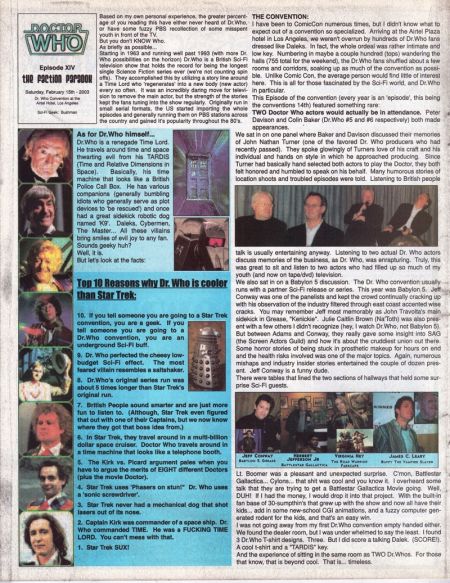 Dr. Who Convention at the Airtel Hotel, Los Angeles

Based on my own personal experience, the greater percentage of you reading this have either never heard of Dr. Who, or have some fuzzy PBS recollection of some misspent youth in front of the TV.

But you don't KNOW Who.

As briefly as possible...

Starting in 1963 and running well past 1993 (with more Dr. Who possibilities on the horizon) Dr. Who is a British Sci-Fi television show that holds the record for being the longest single Science Fiction series ever (we're not counting spin offs). They accomplished this by utilizing a story line around a Time Lord who 'regenerates' into a new body (new actor) every so often. It was an incredibly daring move for television to remove the main actor, but the strength of the stories kept the fans tuning into the show regularly. Originally run in small serial formats, the US started importing the whole episodes and generally running them on PBS stations across the country and gained it's popularity throughout the 80's.

I have been to ComicCon numerous times, but I didn't know what to expect out of a convention so specialized. Arriving at the Airtel Plaza hotel in Los Angeles, we weren't overrun by hundreds of Dr. Who fans dressed like Daleks. In fact, the whole ordeal was rather intimate and low key. Numbering in maybe a couple hundred (tops) wandering the halls (755 total for the weekend), the Dr. Who fans shuffled about a few rooms and corridors, soaking up as much of the convention as possible. Unlike Comic Con, the average person would find little of interest here. This is all for those fascinated by the Sci-Fi world, and Dr. Who in particular.

TWO Doctor Who actors would actually be in attendance. Peter Davison and Colin Baker (Dr. Who #5 and #6 respectively) both made appearances.

We sat in on one panel where Baker and Davison discussed their memories of John Nathan Turner (one of the favored Dr. Who producers who had recently passed). They spoke glowingly of Turners love of his craft and his individual and hands on style in which he approached producing. Since Turner had basically hand selected both actors to play the Doctor, they both felt honored and humbled to speak on his behalf. Many humorous stories of location shoots and troubled episodes were told. Listening to British people talk is usually entertaining anyway. Listening to two actual Dr. Who actors discuss memories of the business, as Dr. Who, was enrapturing. Truly, this was great to sit and listen to two actors who had filled up so much of my youth (and now on tape/dvd) television.

We also sat in on a Babylon 5 discussion. The Dr. Who convention usually runs with a partner Sci-Fi release or series. This year was Babylon 5. Jeff Conway was one of the panelists and kept the crowd continually cracking up with his observation of the industry filtered through east coast accented wise cracks. You may remember Jeff most memorably as John Travolta's main sidekick in Grease, "Kenickie". Julie Caitlin Brown (Na'Toth) was also present with a few others I didn't recognize (hey, I watch Dr. Who, not Babylon 5). But between Adams and Conway, they really gave some insight into SAG (the Screen Actors Guild) and how its about the cruddiest union out there. Some horror stories of being stuck in prosthetic makeup for hours on end and the health risks involved was one of the major topics. Again, numerous mishaps and industry insider stories entertained the couple of dozen present. Jeff Conway is a funny dude.

There were tables that lined the two sections of hallways that held some surprise Sci-Fi guests.

Lt. Boomer was a pleasant and unexpected surprise. C'mon, Battlestar Gallactica... Cylons... that shit was cool and you know it. I overheard some talk that they are trying to get a Battlestar Gallactica Movie going. Well, DUH! If I had the money, I would drop it into that project. With the built-in fan base of 30-sumpthin's that grew up with the show and now all have their kids... add in some new-school CGI animations, and a fuzzy computer generated rodent for the kids, and that's an easy win.

I was not going away from my first Dr. Who convention empty handed either. We found the dealer room, but I was under whelmed to say the least. I found 3 Dr. Who T-shirt designs. Three. But I did score a talking Dalek. (SCORE!). A cool t-shirt and a "TARDIS" key.

And the experience of sitting in the same room as TWO Dr. Whos. For those that know, that is beyond cool. That is... timeless.

As for Dr. Who himself... Dr. Who is a renegade Time Lord. He travels around time and space thwarting evil from his TARDIS (Time and Relative Dimensions in Space). Basically, his time machine that looks like a British Police Call Box. He has various companions (generally bumbling idiots who generally serve as plot devices to 'be rescued') and once had a great sidekick robotic dog named 'K9'. Daleks, Cybermen, The Master... All these villains bring smiles of evil joy to any fan. Sounds geeky huh?

But let's look at the facts:

Top 10 Reasons why Dr. Who is cooler than Star Trek:

9. Dr. Who perfected the cheesy low-budget Sci-Fi effect. The most feared villain resembles a saltshaker.

7. British People sound smarter and are just more fun to listen to. (Although, Star Trek even figured that out with one of their Captains, but we now know where they got that boss idea from.)

6. In Star Trek, they travel around in a multi-billion dollar space cruiser. Doctor Who travels around in a time machine that looks like a telephone booth.

5. The Kirk vs. Picard argument pales when you have to argue the merits of EIGHT different Doctors (plus the movie Doctor).

3. Star Trek never had a mechanical dog that shot lasers out of its nose.

2. Captain Kirk was commander of a space ship. Dr. Who commanded TIME. He was a FUCKING TIME LORD. You can't mess with that.