Doctor Who Lost and Presumed Regenerated 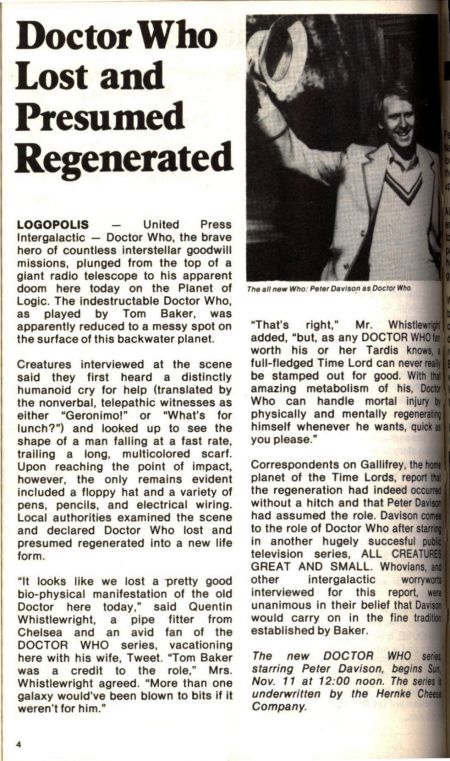 LOGOPOLIS — United Press Intergalactic — Doctor Who, the brave hero of countless interstellar goodwill missions, plunged from the top of a giant radio telescope to his apparent doom here today on the Planet of Logic. The indestructable Doctor Who, as played by Tom Baker, was apparently reduced to a messy spot on the surface of this backwater planet.

Creatures interviewed at the scene said they first heard a distinctly humanoid cry for help (translated by the nonverbal, telepathic witnesses as either "Geronimo!" or "What's for lunch?") and looked up to see the shape of a man falling at a fast rate, trailing a long, multicolored scarf. Upon reaching the point of impact, however, the only remains evident included a floppy hat and a variety of pens, pencils, and electrical wiring. Local authorities examined the scene and declared Doctor Who lost and presumed regenerated into a new life form.

"It looks like we lost a pretty good bio-physical manifestation of the old Doctor here today," said Quentin Whistlewright, a pipe fitter from Chelsea and an avid fan of the DOCTOR WHO series, vacationing here with his wife, Tweet. "Tom Baker was a credit to the role," Mrs. Whistlewright agreed. More than one galaxy would've been blown to bits if it weren't for him."

"That's right," Mr. Whistlewright added, "but, as any DOCTOR WHO fan worth his or her Tardis knows, full-fledged Time Lord can never really be stamped out for good. With amazing metabolism of his, Doctor Who can handle mortal injury physically and mentally regenerating himself whenever he wants, quick as you please."

Correspondents on Gallifrey, the home planet of the Time Lords, report that the regeneration had indeed occurred without a hitch and that Peter Davison had assumed the role. Davison comes to the role of Doctor Who after starring in another hugely successful public television series, ALL CREATURES GREAT AND SMALL. Whovians, and other intergalactic worryworts interviewed for this report, were unanimous in their belief that Davison would carry on in the fine tradition established by Baker.

The new DOCTOR WHO series starring Peter Davison, begins Nov. 11 at 12:00 noon. The series underwritten by the Hernke Cheese Company.

The all new Who Peter Davison as Doctor Who