Doctor Who Renewed Without Baker 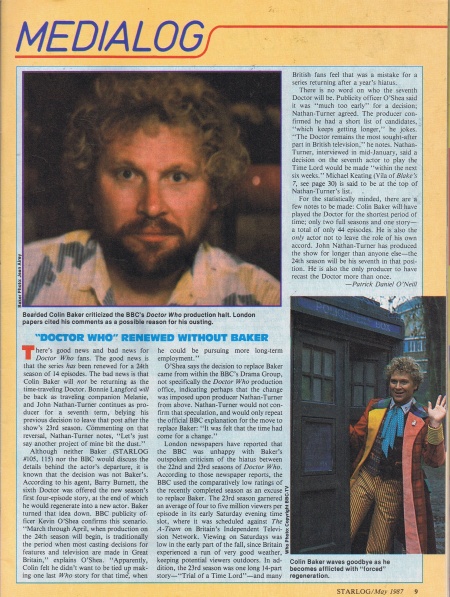 There's good news and bad news for Doctor Who fans. The good news is that the series has been renewed for a 24th season of 14 episodes. The bad news is that Colin Baker will not be returning as the time-traveling Doctor. Bonnie Langford will be back as traveling companion Melanie, and John Nathan-Turner continues as producer for a seventh term, belying his previous decision to leave that post after the show's 23rd season. Commenting on that reversal, Nathan-Turner notes, "Let's just say another project of mine bit the dust."

Although neither Baker (STARLOG #105, 115) nor the BBC would discuss the details behind the actor's departure, it is known that the decision was not Baker's. According to his agent, Barry Burnett, the sixth Doctor was offered the new season's first four-episode story, at the end of which he would regenerate into a new actor. Baker turned that idea down. BBC publicity officer Kevin O'Shea confirms this scenario. "March through April, when production on the 24th season will begin, is traditionally the period when most casting decisions for features and television are made in Great Britain," explains O'Shea. "Apparently, Colin felt he didn't want to be tied up making one last Who story for that time, when he could be pursuing more long-term employment."

O'Shea says the decision to replace Baker came from within the BBC's Drama Group, not specifically the Doctor Who production office, indicating perhaps that the change was imposed upon producer Nathan-Turner from above. Nathan-Turner would not confirm that speculation, and would only repeat the official BBC explanation for the move to replace Baker: "It was felt that the time had come for a change."

London newspapers have reported that the BBC was unhappy with Baker's outspoken criticism of the hiatus between the 22nd and 23rd seasons of Doctor Who. According to those newspaper reports, the BBC used the comparatively low ratings of the recently completed season as an excuse to replace Baker. The 23rd season garnered an average of four to five million viewers per episode in its early Saturday evening time slot, where it was scheduled against The A-Team on Britain's Independent Television Network. Viewing on Saturdays was low in the early part of the fall, since Britain experienced a run of very good weather, keeping potential viewers outdoors. In addition, the 23rd season was one long 14-part story—"Trial of a Time Lord"—and many British fans feel that was a mistake for a series returning after a year's hiatus.

There is no word on who the seventh Doctor will be. Publicity officer O'Shea said it was "much too early" for a decision; Nathan-Turner agreed. The producer confirmed he had a short list of candidates, "which keeps getting longer," he jokes. "The Doctor remains the most sought-after part in British television," he notes. Nathan-Turner, interviewed in mid-January, said a decision on the seventh actor to play the Time Lord would be made "within the next six weeks." Michael Keating (Vila of Blake's 7, see page 30) is said to be at the top of Nathan-Turner's list.

For the statistically minded, there are a few notes to be made: Colin Baker will have played the Doctor for the shortest period of time; only two full seasons and one story—a total of only 44 episodes. He is also the only actor not to leave the role of his own accord. John Nathan-Turner has produced the show for longer than anyone else—the 24th season will be his seventh in that position. He is also the only producer to have recast the Doctor more than once.

Caption: Bearded Colin Baker criticized the BBC's Doctor Who production halt. London papers cited his comments as a possible reason for his ousting.